Alan Robert Pearlman was born in 1925 (9 years before Bob Moog and 12 years before Don Buchla although he would outlive them both) and grew up in New York City.

Like many electronics buffs in the mid 20th century, he grew up making radios out of kits and schematics from Popular Mechanics.

Like Don Buchla, Pearlman did engineering work for NASA where he designed amplifiers for the Gemini and Apollo space programs.

Then in 1969, he founded ARP (based on his initials and the nickname he had as a kid growing up) and soon started producing the ARP 2500 modular synthesizer.

The ARP 2500 had two important differences from Moog and Buchla modular synths.

Instead of patch chords, the 2500 used a set of matrix switches to make connections between modules.

Perhaps even more importantly, Pearlman had found a way to solve a fundamental problem with the other modular synths. Because of their design, Moog and Buchla synths were sensitive to temperature (and changes in line voltage).  Pearlman had a lot of experience in designing Op Amps from his time at NASA and he explained his solution to the problem which was to use dual transistors on a single integrated circuit.

"Bob Moog came up with a generator for logarithmic function and exponential function in different locations. They were not at the same temperature and would drift apart and get out of tune with each other. I saw papers by other engineers which showed means of stabilizing these functions by building constant temperature devices. It was much easier to simply put them at the same chip."

By the early 70s, there were a lot of famous bands that were using synthesizers.  Rock bands like the Who were using the ARP 2500 on albums like Quadrophrenia and Tommy. Keyboard players from a variety of genres were expanding their sonic palette.

A great example of what was possible with a monophonic modular synthesizers is Elton John's 1973 release "Funeral For A Friend".  The extended intro that song was created by the sound engineer on the album David Hentschel.

The way I used to work was to write charts out and then play monophonic parts on the ARP so I could play with one hand and adjust the gain and so on at the same time, to give it more dynamics. Playing polyphonically on analogue synths can give rather flat results. You don't get any sense of movement. But if you write the parts out and then play them monophonically, then you get a lot more control.

In 1971, ARP released the ARP 2600  which had some significant improvements to the 2500's design.  The 2600 could use both patch chords and had matrix switches.  The patch chords gave more possibilities, but the 2600 could be used without patch chords which made it easier to use on stage.

Another advance which would prove prophetic was to separate the keyboard and allow the keyboard to connected remotely to the modular synth by cable (just as MIDI would allow for remote keyboard and sound modules a few years later.

Edgar Winter figured out that he could put a guitar strap on the remote keyboard for the 2600 and wear like a guitar inventing the "Keytar".

Edgar Winter and his ARP2600 used on "Frankenstein"

Arp Synths have a Close Encounter with Hollywood

In 1977, not only were the sounds of the ARP 2500 featured in Steven Spielberg's film "Close Encounters of the Third Kind", but the 2500 itself and even ARP Instruments' VP of engineering Phil Dodds (pictured here as the operator) were in the film. 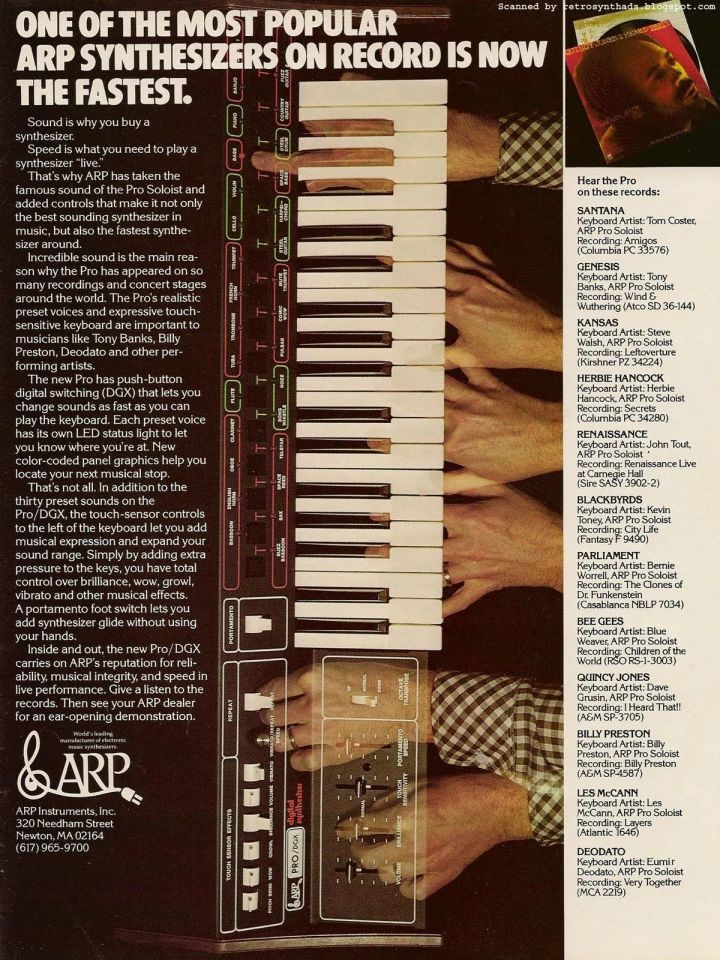 ARP was one of the first companies to successfully use artists in magazine advertisements to promote synthesizers.

Artists including The Who, Stevie Wonder, Joe Zawinul, George Duke, Herbie Hancock and many others were featured in ARP ads.

It's also important to point out that the Arp Soloist pictured above was one of the first synths to feature Presets.

ARP was founded in 1969, by Alan Pearlman with $100,000 of his own money and support from a small group of investors.

However the company invested heavily in the development of the the Avatar guitar synthesizer.  Increased competition and falling  sales figures led to a financial crisis and the company was liquidated in 1981.

His daughter,  Dina R. Alcalay Pearlman established the Alan R Pearlman Foundation with the mission to celebrate the legacy of inventor, musician, entrepreneur and engineer Alan R. Pearlman, by making his innovative inventions publicly accessible, and inspiring future generations to imagine and create.

For more information about ARP, please check out the following links. 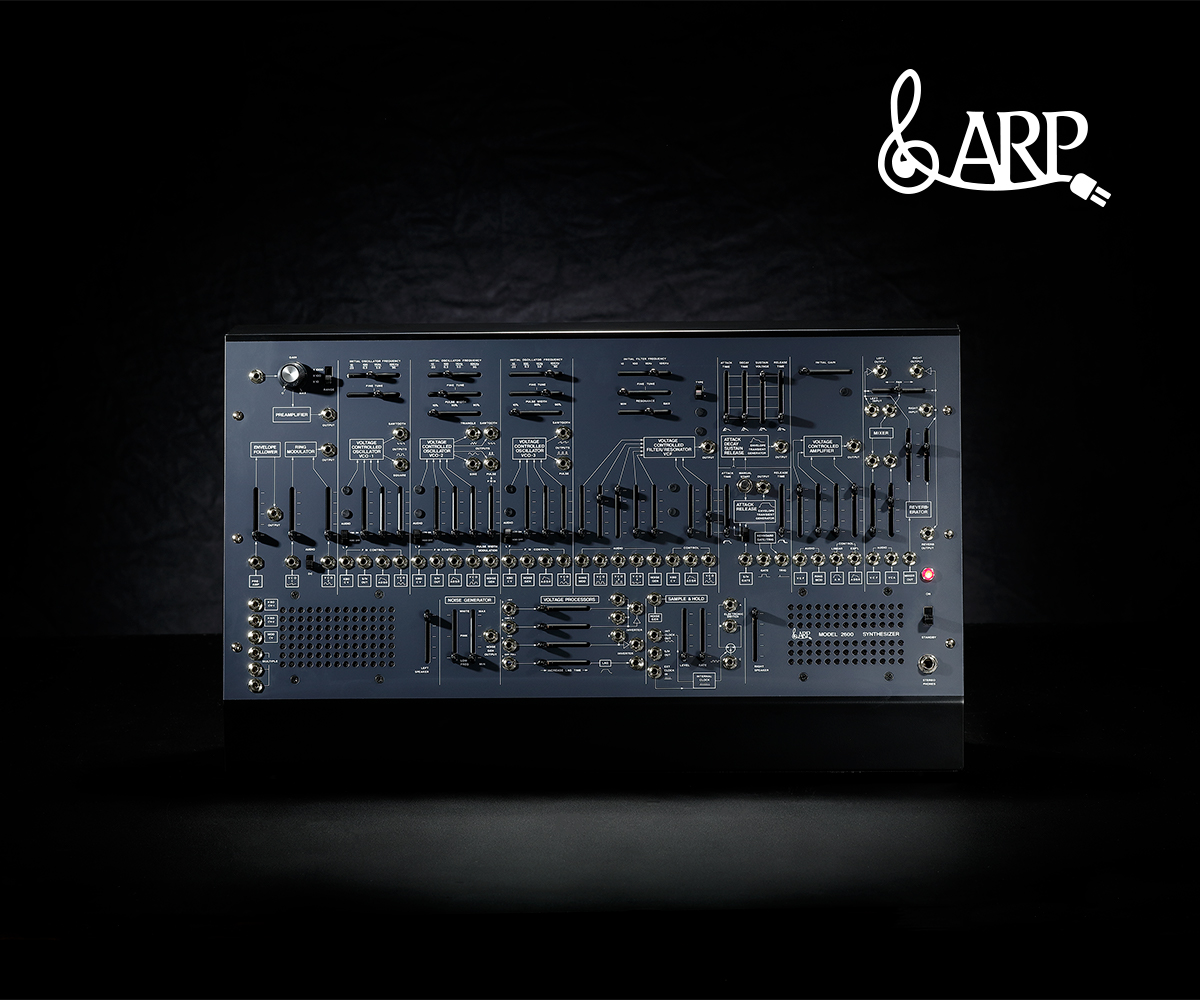 The most iconic synth for the Modern musician
https://www.korg.com/us/products/synthesizers/arp2600_m/

The Story Behind ARP Instruments in the 1970s

The fascinating story of an analog synths company and the instruments that made music history. Music by The Who, Elton John, Genesis, Weather Report, Frank Zappa.
https://musicaficionado.blog/2019/01/30/arp-instruments-in-the-1970s/

Alan R. Pearlman was nicknamed “ARP” as a kid growing up in New York City, so it seemed the perfect name for a company when he was later designing electronic musical instruments. The first instrument created by Alan was the modular synthesizer known as the ARP 2500. The monophonic product was released years after the first Moog and Buchla instruments, but gained attention for several new features including the ever-popular function of not drifting out of tune, which was a common problem in the earlier products. Next came the now classic ARP 2600, and soon the company became a great leader in the growth and development of the electronic musical market.
https://www.namm.org/library/oral-history/alan-r-pearlman
Tweet
pinterest
×
Stay Informed