A DAW's MIDI Plug-Ins Can Provide Solutions to Common Problems

In a world obsessed with audio plug-ins, MIDI plug-ins may not seem sexy—but with MIDI's continued vitality, they remain very useful problem solvers. For an introduction to MIDI plug-ins, please check out the article Why MIDI Effects Are Totally Cool: The Basics. 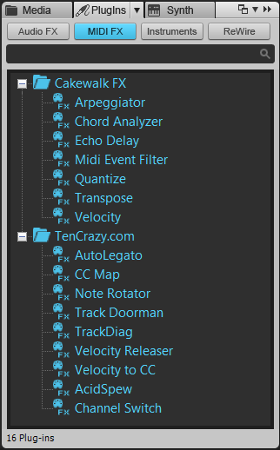 Figure 1: In Cakewalk by BandLab, you can drag MIDI plug-ins from the browser into a MIDI track’s effects inserts.

Unfortunately most companies lock MIDI plug-ins to their own programs. Therefore this article takes a general approach that describes typical problems you can solve with MIDI plug-ins, but note that not all programs have plug-ins that provide these functions, nor do all hosts support MIDI plug-ins.

MIDI plug-ins are generally real-time and non-destructive (some can work offline as well). If you're writing a song and craft a great drum groove that suffers from shaky timing, don't dig into the quantization menu and start editing—insert a MIDI quantizing plug-in, set it for eighth or 16th notes, and keep grooving. You can always do the "real" edits later.

If your host has a Transpose MIDI plug-in, it might do a lot more than audio transposition plug-ins—like transpose by intervals or diatonically, change scales in the process of transposing from one key to another, or create custom transposition maps that can map notes to drums. The image above shows a variety of MIDI plug-ins; clockwise from upper left is the Digital Performer arpeggiator, Live arpeggiator, Cubase microtuner, Live randomizer, Cubase step sequencer, Live scale constrainer, Digital Performer Transposer, Cubase MIDI Echo.

You're driving two instruments from a MIDI controller, and want one to respond to sustain but not the other…or filter out pitch bend before it gets to one of the instruments. Data filtering plug-ins can implement these applications, but many can also create splits and layers. If the plug-in can save presets, you can instantly call up oft-used functions (like remove aftertouch data).

Feed your footpedal through a re-mapping plug-in to control breath control parameters, mod wheel, volume, aftertouch, and the like. There may also be an option to thin or randomize control data, or map data to a custom curve.

You can compress, expand, and limit MIDI data (to low, high, or both values). For example, a plug-in could specify that all values under a certain value adopt that value, or compress velocity dynamics by a ratio, like 2:1. While you don't need a MIDI plug-in to do these functions (you can usually scale velocities, then add or subtract a constant using traditional MIDI processing functions), a plug-in is more convenient.

Although arpeggiation isn't as front and center in today's music as it was when Duran Duran was tearing up the charts, it's still valid for background fills and ear candy. With MIDI plug-in arpeggiator options like multiple octaves, different patterns, and rhythmic sync, arpeggiation is well worth re-visiting if you haven't done so lately. Arpeggiators can also produce interesting patterns when fed into percussion tracks.

"Humanizer" plug-ins usually randomize parameters, like start times and/or velocities, so the MIDI timing isn't quite so rigid. Personally, I think they're more accurately called "how many drinks did the player have" because musicians tend not to create totally random changes. But taking a cue from that, consider teaming humanization with an event filter. For example if you have a string of 16th note hi-hat triggers, use an event filter to increase velocities that fall on the first note of a beat, and perhaps add a slight increase to the third 16th note in each series of four. Then if you humanize velocity slightly, you'll have a part that combines conscious change with an overlay of randomness. 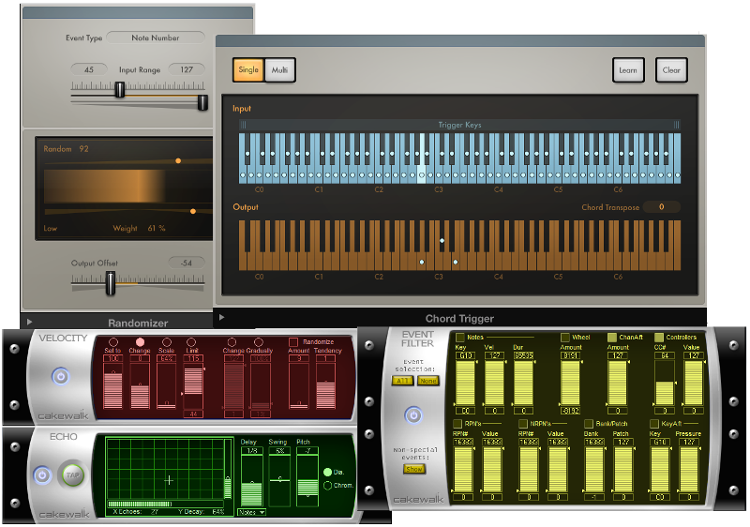 Much depends on a plug-in's individual capabilities, but many allow variations on the echoes—change pitch as notes echo, do transposition, add swing (try that with your audio plug-in equivalent), and more. But if those options aren't present, there's still DIY potential because you can render the track with a MIDI plug-in, then tweak the echoes manually. MIDI echo makes it particularly easy to generate staccato, "dugga-dugga-dugga" synth parts that provide rhythmic underpinnings to many dance tracks; the only downside is that long, languid echoes with lots of repeats eat up synth voices.

A Shift MIDI plug-in shifts note start times forward or backward. This benefits greatly from MIDI plug-ins' real-time operation because you can listen to the changes in "feel" as you move, for example, a snare hit ahead or behind the beat somewhat.

"De-glitcher" plug-ins remove duplicate events that hit on the same beat, filter out notes below a specific duration or velocity, "de-flam" notes to move the start times of multiple out-of-sync notes to the average start time, or other options that help clean up pollution from MIDI data streams.

Constrain Notes to a Scale, and Nuke Wrong Notes

Plug-ins that can snap to scale pull errant notes into a defined scale—just bash away at a keyboard (or have a cat walk across it), and there won't be any "wrong" notes. Placing this after a randomizer can be very interesting, as it offers the benefits of randomness yet notes are always constrained to particular scales.

Put this plug-in on a track, and it will read out the kind of chord made by the track's notes. With ambiguous chords, the analyzer may display all voicings it recognizes. Aside from figuring out exactly what you played when you had a spurt of inspiration, for those using MIDI backing tracks an analyzer simplifies figuring out chord progressions.

Add an LFO to Just About Anything

Being able to change MIDI parameters rhythmically can add considerable interest and animation to synth modules and MIDI-controllable signal processors. Although some DAWs let you draw in periodic waveforms (and you can always take the time to create a library of MIDI continuous controller signals suitable for pasting into programs), a Continuous Controller generator provides these same functions in a much more convenient package.

The above functions are fairly common—but scratch beneath the surface, and you'll find all kinds of interesting MIDI plug-ins, either bundled with hosts or available from third parties. Midiplugins.com lists MIDI plug-ins from various companies. Some of the links have disappeared into internet oblivion and some belong to zombie sites, but there are still plenty of potentially useful MIDI effects. More resources are available at midi-plugins.de, (the most current of the sites), and tencrazy.com. Happy data diving!