Roger Linn was born in Whittier, California in 1955.

Roger learn to play guitar growing up in the 1960s and when he was in high school, he started messing around with electronics.

While in high school I modified a fuzz tone product called the Foxx Tone Machine with some simple filters to make it sound more like real guitar amp distortion. I sold one to a little-known girl band at the time called Fanny. It apparently failed on stage, causing a news station to come through the P.A. Also during that time I had an after school job installing pickups and electronics in guitars, and had more switches in my guitar than an electronic voting machine in a California governor recall election.

by Roger Linn in an interview for Sonic State 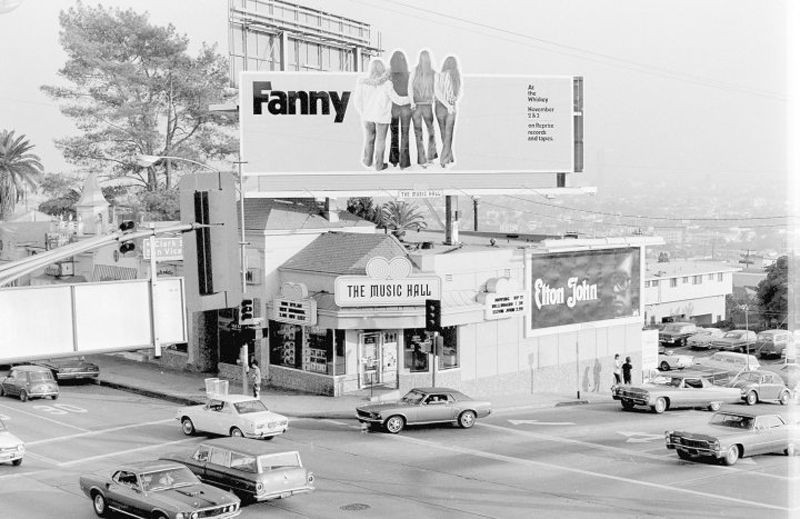 Career as a Songwriter and Guitarist

In 1976 at age 21, Roger went out on tour as a guitarist with the pianist/songwriter Leon Russell. That's Roger on the left. 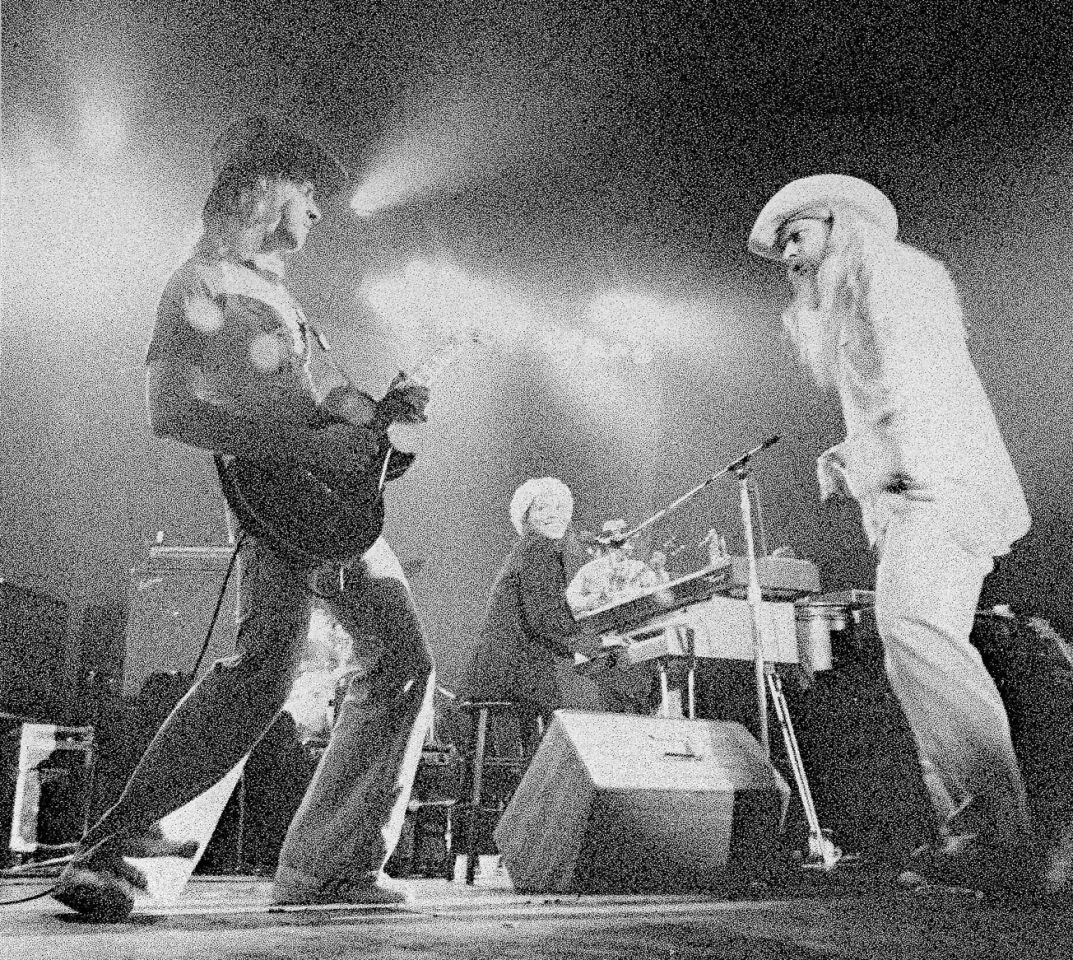 Roger Linn also wrote several hit songs including "Promises" for Eric Clapton in 1979 and "Quittin' Time" penned with Robb Royer from Bread and covered by a number of people including Mary Chapin Carpenter.

Roger was doing well as a songwriter,  but had a simple problem.  He wanted to have realistic drum parts for his songwriting demos and there was nothing that sounded like a real drummer back then.

Plus he was on the road with Leon Russell and wanted to be able to work on songs in his hotel room.

Two years later he was ready to announce the first drum machine to use samples- the LM-1. It was Steve Porcaro from Toto who it is rumored to have suggested to Roger that he should look at using real samples in a drum machine.

He started a company called Moffett Electronics with Alex Moffett. The LM in the product name is for Linn and Moffett. 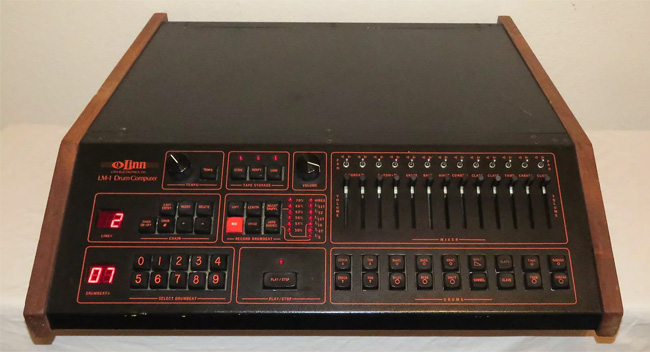 When I would do demos of the early LM–1 prototype, people's jaws would drop. They were amazed to hear the sound of a real drum when they hit a button. So I knew I was on to something.

by Roger Linn in an interview with Reverb

Leon Russell is probably not the first name you think of when mentioning synthesists of the 1970s.

But as we documented in our article about Tom Oberheim, Leon Russell had purchased an ARP 2600 from Tom when Oberheim was the ARP dealer in LA.

On his album "Life and Love" released in 1979, Leon was the first artist to use a sampled drum machine on a record.

In fact, Roger Linn not only played guitar on the record, he is credited as a co-producer because he wrote the drum parts on the LM-1.  In fact, there is NO drummer on the record so all of the drums were done by the LM-1.

Credits for the album Life and Love.

Here is the title track from Leon Russell's 1979 album.

Russell is also given credit by Roger Linn for adding two important features to the LM-1 that would become staples of almost all digital drum machines in the future- Handclaps and a Swing feature.

At first Roger didn't think handclaps were necessary because you could record them so easily. Russell convinced Roger that after three choruses of hand claps, your hands would be pretty beat up so it would be better to have a consistent recorded sample.

In his NAMM Oral history interview below, Leon Russell talks about how he convinced Roger to add Handclaps ot the LM-1. Russell also talks about admiration for Hal Chamberlin who developed the Mellotron and how Ikutaro Kakehachi, President of Roland came to visit him in Tulsa, Oklahoma. It's a surprising look at how into technology Leon Russell was.

It was Leon who taught me about swing timing, which he called 'shuffle. He explained that one of the big factors in a drummer's feel was the degree of shuffle timing in his playing. Some drummers played straight sixteenths with a hint of shuffle.

I added the code to delay — by a variable amount — the alternate 1/8 or 1/16 notes, thereby turning a straight beat in a shuffle/swing 1/8 or 1/16 beat and by an adjustable amount. This allowed me to dial in the exact groove I wanted."

by Roger Linn in his Reverb interview

Getting the LM1 off the ground

Things weren't easy at the beginning because Roger didn't have experience in producing products, he was a songwriter and guitarist.  He borrowed $20,000 from his father to help fund the development and when that ran out, he paid the person who designed the printed circuits boards for the LM-1 by giving him Roger's 12 year old Porsche.

He had a prototype designed, but the exterior case wasn't ready yet so Linn would haul the LM-1 around in a cardboard box to Hollywood parties and got a number of people including Peter Gabriel, Fleetwood Mac, and Stevie Wonder to put down 50% deposits ($2500) on an LM-1.

Who recorded the samples for the LM-1

There were many stories about who recorded the samples for the LM-1, but in an August 15, 2017 interview for Reverb by Lou Carlozo, Roger Linn put all the rumours to rest.

It was a drummer named Art Wood, a good friend of mine with whom I had been in bands. It seems that no matter how many times I tell people that Art played the original drum samples, no one believes it, and they love to create myths. I've heard that the original samples were played by Steve Gadd, Jeff Porcaro, Dave Garibaldi, and others, but it was all Art.

by  Roger Linn in an interview for Reverb 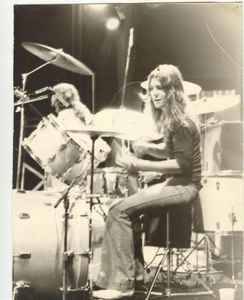 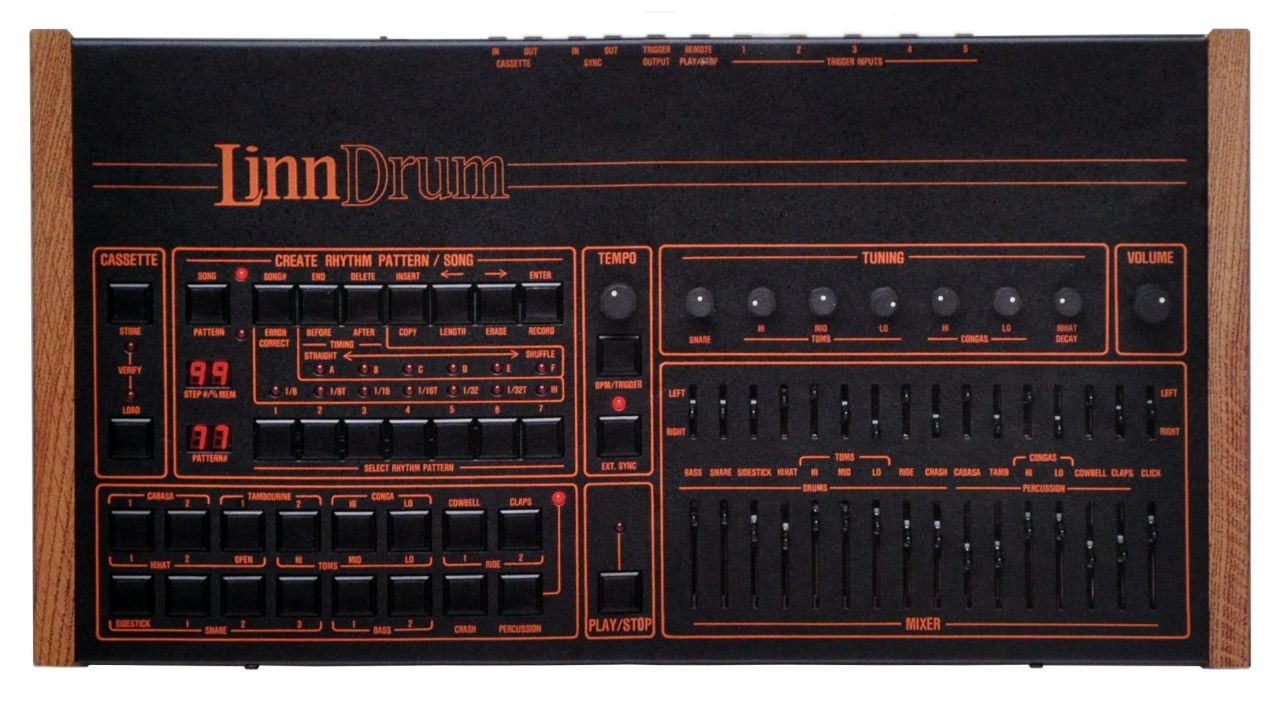 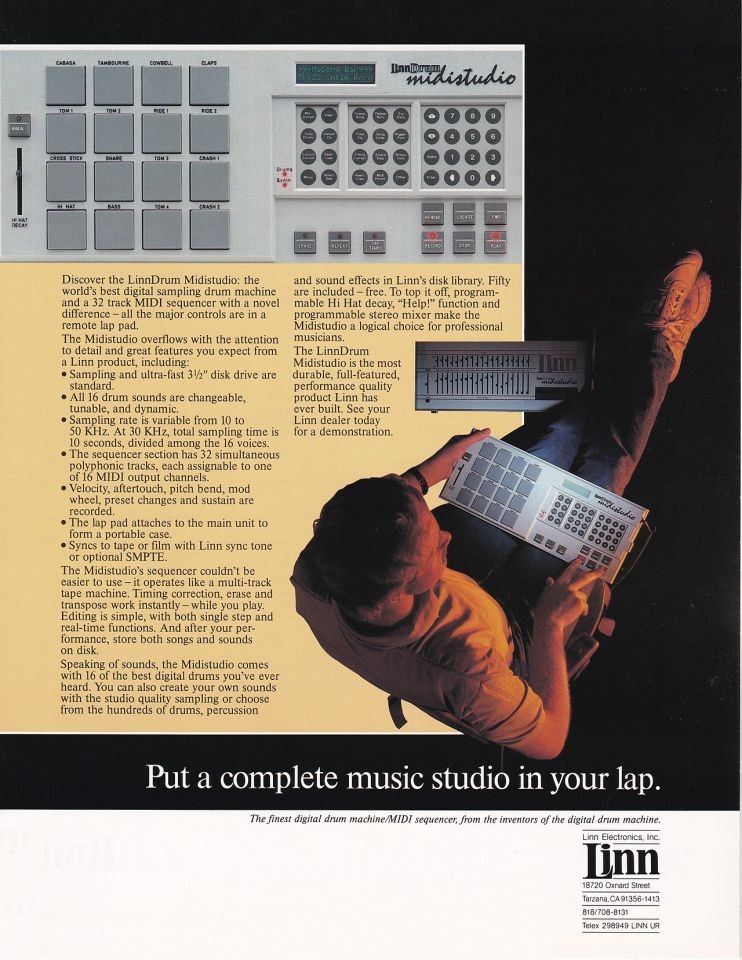 After Linn Electronics, Linn was contacted by the Japanese company Akai and worked to design the MPC60, an integrated digital sampling drum machine and MIDI sequencer released in 1988.

All the MPC products had a major influence on the development of hip hop and electronic music and the 4x4 grid of pads was adopted by numerous manufacturers.

Linn left Akai when the company went out of business in 2005. 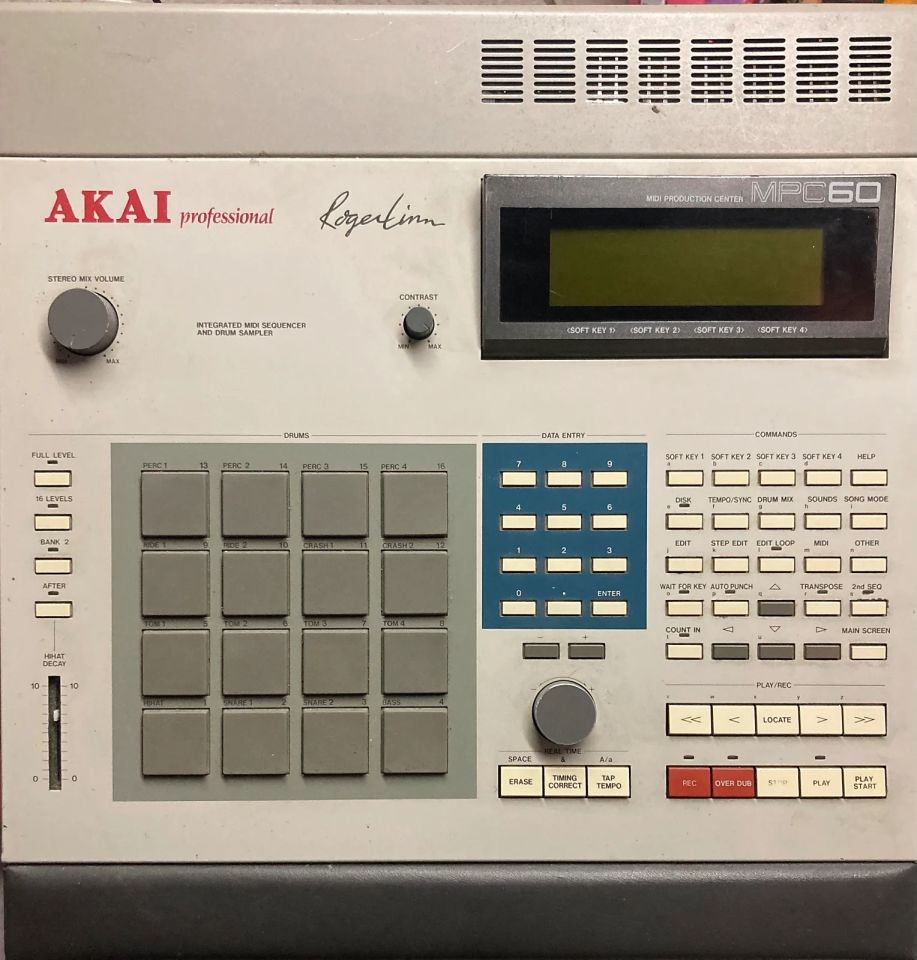 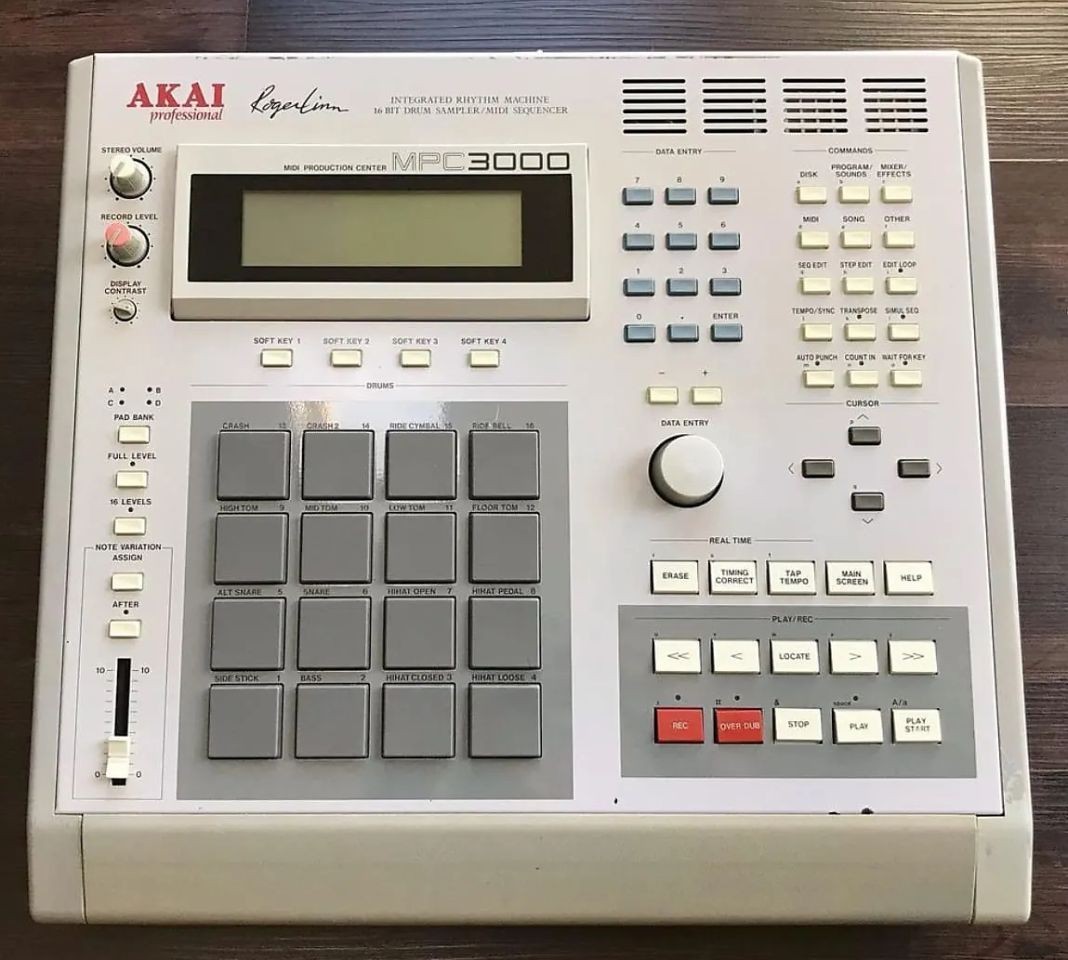 In 2001 Roger Linn founded a new company, Roger Linn Design. With the help of Dave Smith and Tom Oberheim, Roger developed the company's first product offering - the AdrenaLinn, a digital multi-effects unit combined with a drum machine and amp modeler.

The AdrenaLinn Series of Products 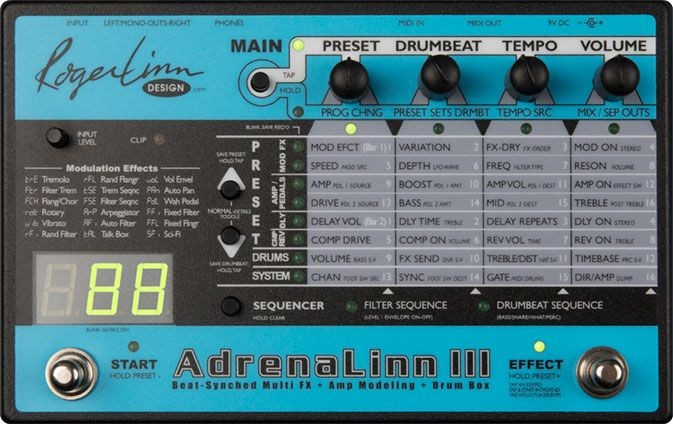 Select one of the 200 presets, play simple chords or arpeggios in time to one of the drumbeats, and listen as AdrenaLinn III transforms them into looped rhythmic patterns of spiked, swooped, swirled, chopped and mangled tonal variations, inspiring you to new and unexpected compositional ideas. Or simply use a tremolo, flanger or delay that moves in perfect sync to the beat. All the modulation effects you know and love now sync to you. The built-in compression keeps the filter peaks in check, and reverb tops it off.

It's a sequenceable filter, it's an amp modeller, and it's a drum machine... it's the AdrenaLinn, the new guitar processor from famed designer Roger Linn, best known for his classic drum machines and sequencing workstations.
https://www.soundonsound.com/reviews/roger-linn-design-adrenalinn

Roger Linn and Dave Smith had always remained friends often sharing booth space and traveling to trade shows together. In 2011, they worked together and released the Tempest, a product that used Dave Smith's vast knowledge of analog synthesis and Roger's passion for drum machines, beat synched effects and sequencing to bring the world a new take on what a drum machine could be. 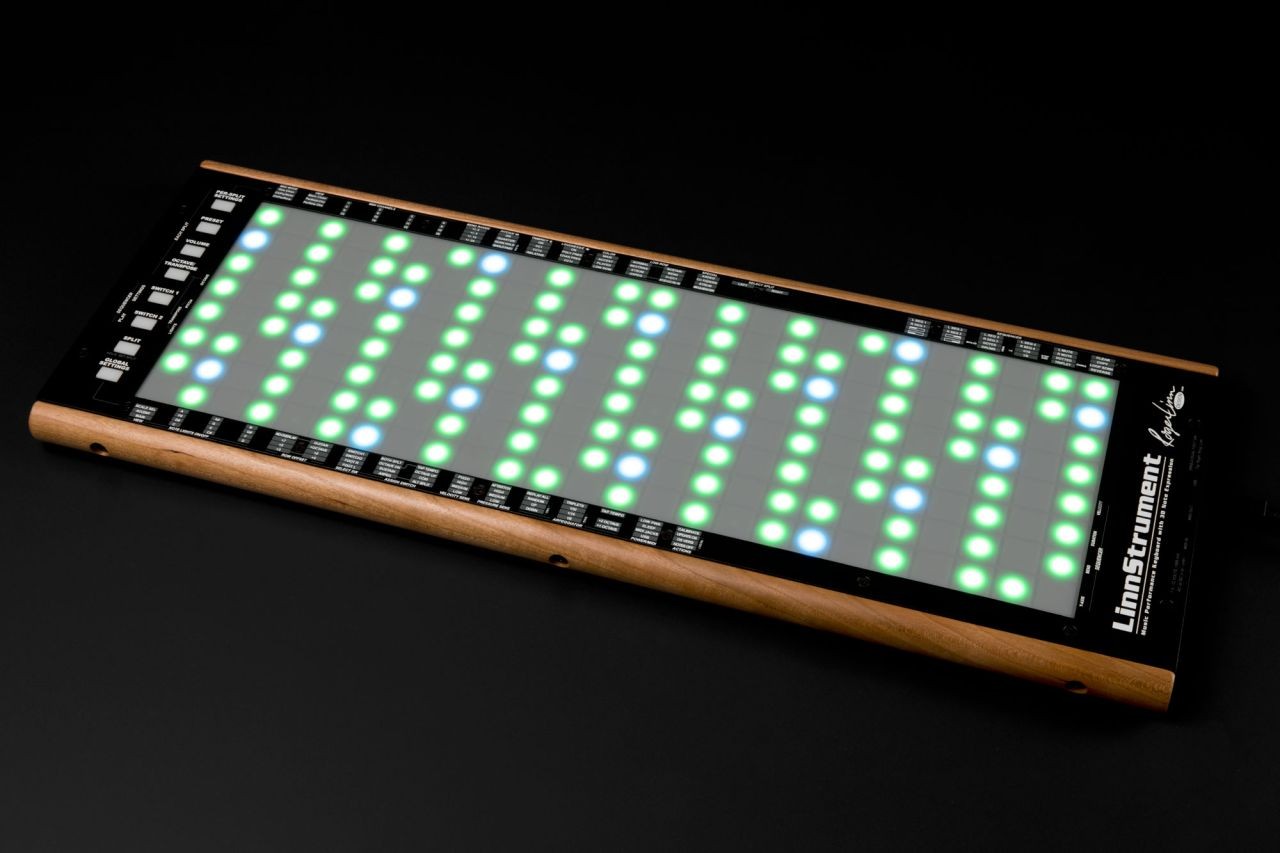 At the Winter NAMM show in 2014, Roger introduced his newest design, simply called the LinnStrument.

Roger had teamed up with Geert Bevin, who has been a major propropent of MPE (MIDI Polyphonic Expression) and is also a member of the  MIDI Association's Technical Standards Board.

Roger was a guitarist and had always been frustrated with the limitations of MIDI and the fact that MIDI did not seem capable of expressing all the subtleties of expression that were possible with a six strings. Geert had already worked on many expressive controllers like Eigenharp.

Together their goal was nothing short of completely re-inventing the MIDI controller.

MPE created a way to get around some of MIDI 1.0's limitations by using channel rotation so each note could be assigned its own channel and allowing Channel messages like Pitch Bend, Cutoff to be independently controlled for each voice in the Linnstrument.

In fact, Geert has described MPE as the bridge between MIDI 1.0 and MIDI 2.0 (MIDI 2.0 has Per Note Controllers and Per Note Pitch Bend). 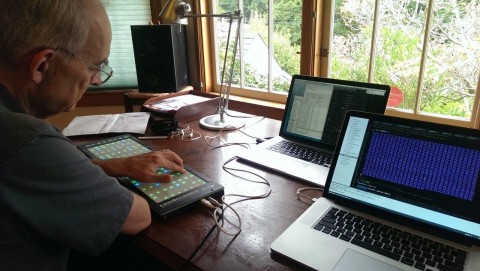 On May 26, we held the very first MIDI Live! chat with a panel of MPE specialists. We recorded the session and it is here as a podcast. Roger Linn demoed the Linnstrument for us.
https://www.midi.org/midi-articles/mpe-midi-live-chat-podcast

Roger Linn forever changed the way people dance! As the inventor of the electronic Linn drum machine, he ushered in the new wave of electronic dance music beginning in the 1980s. The Linn drum machine also brought new meaning to the term “re-mix” and opened up a new era of sampling for club dj’s around the world. Roger worked closely with David Smith and others in the early efforts of MIDI in the 1980s. Roger has since created a host of successful products, including the AdrenaLinn guitar synth, which uses modern technology to bring some of his early concepts into the digital age.
https://www.namm.org/library/oral-history/roger-linn Leon Russell was the noted musician and songwriter who contributed greatly to popular and rock music during his long career.  As a studio musician, Leon was active in the development of the Linn Drum Machine having provided Roger Linn with several ideas to create new sounds, such as the hand clap and longer loops.  He recorded extensively with other artists and on his own as a solo performer.  He was also an award-winning songwriter who penned classic hits for himself as well as many other artists.
https://www.namm.org/library/oral-history/leon-russell 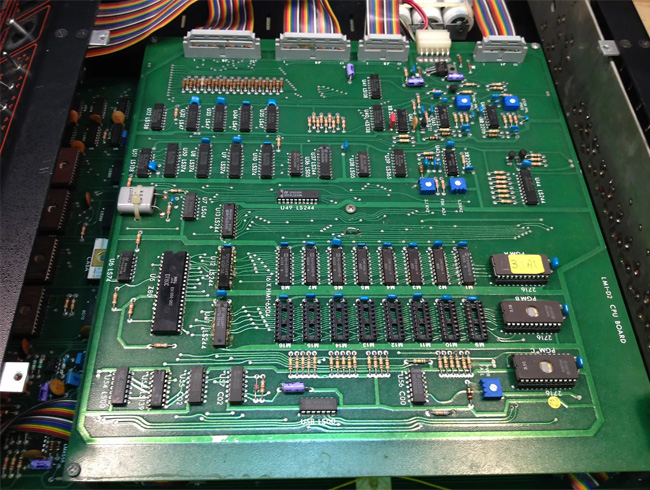 The Return Of Roger Linn

Roger Linn's name may be forever associated with the birth of the first serious, sample-based drum machine in 1979, but now, after years away from instrument design, he's back with a new guitar-oriented product offering rhythmic filter effects.
https://www.soundonsound.com/people/return-roger-linn 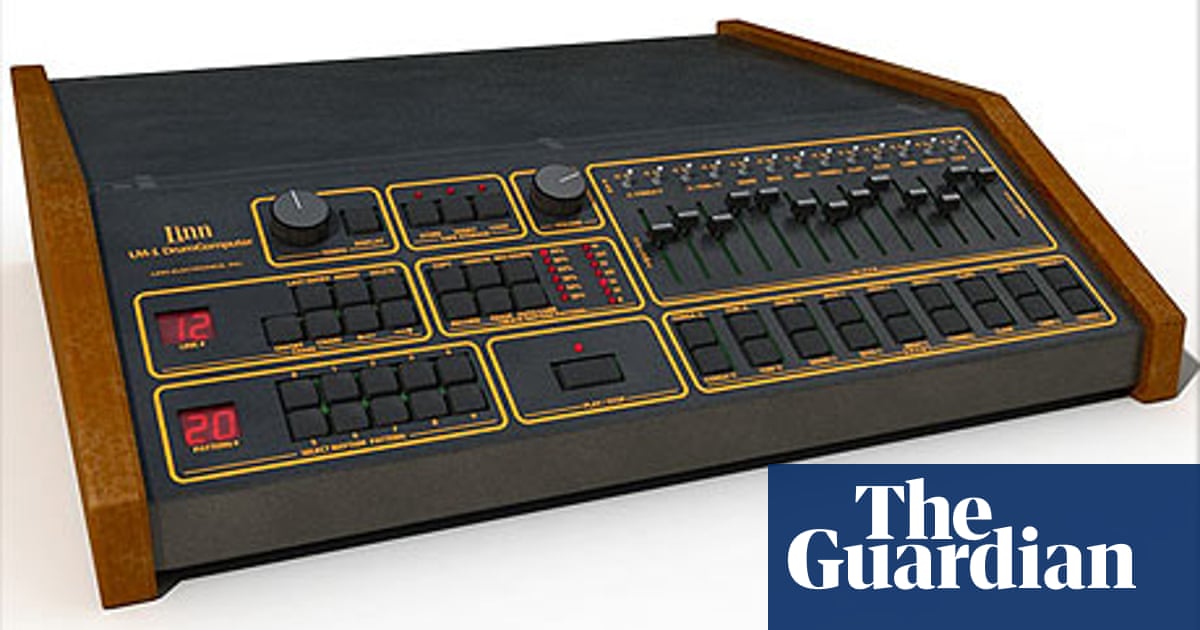