Alternative Controllers: Part 2 from The Synthesizer by Mark Vail 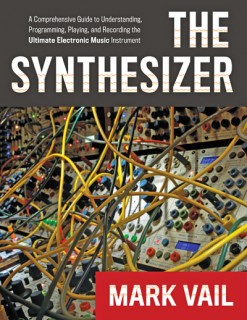 If you'd prefer a surface that's stretched much further, consider the Haken Continuum Fingerboard (http://www.hakenaudio.com/Continuum). Its control surface feels like silk and looks like a wide ribbon with alternating scarlet and maroon stripes. Designed by Lippold Haken, the Continuum goes beyond two dimensions. Its low-friction surface responds to finger positions from side to side (X-factor) and front to back (Y-factor), as well as the exerted pressure (Z-factor) — polyphonically for up to 16 fingers! The Continuum is available in two sizes — about as broad as four- and eight-octave keyboards — and later models come with a built-in synth chip for stand-alone operation. All Continuums have MIDI I/O. Optionally available is the Continuum Voltage Converter (CVC), which outputs gate and control voltages for the X, Y, and Z coordinates over four voice channels, allowing you to control analog synths that have CV and gate inputs. 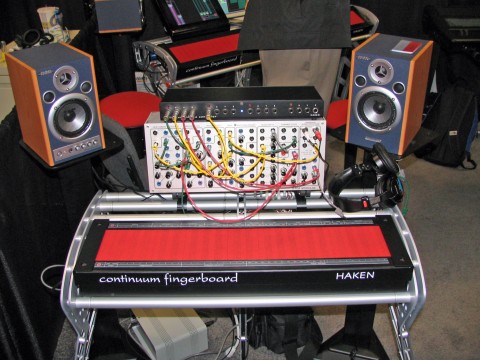 A half-size Haken Audio Continuum and its Control Voltage Converter (top) set up with a Serge Modular Blue Fun Station panel on top of a prototype of the Continuum Stand at the January 2007 NAMM show. (Mark Vail)

Synthesist/composer Gary Chang is a devoted Continuum user who finds it a very expressive controller that's easy to play in monophonic mode, but more challenging to control polyphonically when all three axes are simultaneously active. Disabling one of the axes makes its response more manageable. Chang also reports that traditional keyboard fingerings can feel awkward since such gestures on a flat surface offer no physical feedback like a mechanical keyboard does. However, he says the Continuum's Rounding function, which quantizes the initial pitch, can help. "I especially appreciate the Continuum's build quality," Gary adds. "It's built for the ages, which is important because I see the Continuum as a lifetime commitment." 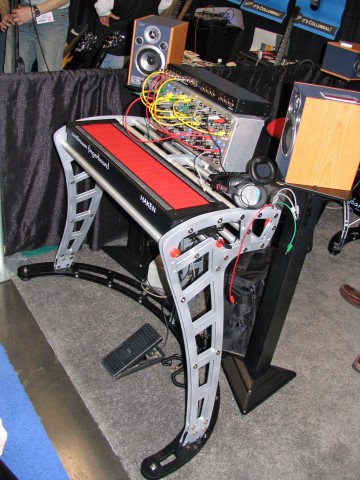 While the Haken Continuum Fingerboard uses different colors to designate note ranges in widths like the keys of a piano but on a flat surface, Roli's lineup of Seaboard controller/instruments features three-dimensional keybeds that feel spongy and are arched — Roli describes them as "Keywaves" — but arranged precisely like the keys on a piano (https://www.roli.com). Although there's no mechanical action, the keybed senses the velocity with which you strike the surface, how hard you press down once you've hit a "key" for both aftertouch response and polyphonic pitch-bending, and the individual positions of your fingers on the surface so that you can slide from one note to another like a cellist. In addition, there are horizontal, flat ribbons stretched across above and below the keybed that allow you to smoothly glide pitches up and down in frequency.

As of October 2015 Roli offers three Seaboard Grand models, each of which comes with Equator and FXpansion Synth Squad Player software instruments for Mac; you can transfer Equator sounds into the Seaboard Grand for stand-alone use. Each model has three ¼" footpedal jacks, ¼" L/R and stereo headphone audio outputs, and USB connectors for interfacing with a computer and MIDI I/O. As for the number of keys, the Seaboard Grand Studio has 37, Seaboard Grand Stage has 61, and Seaboard Grand Limited First Edition has 88. 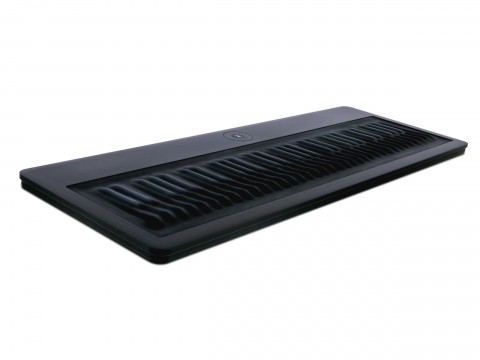 Introduced in early 2013, the Roli Seaboard Grand provides a soft, three-dimensional surface consisting of ridges — Roli refers to them as "Keywaves" — arranged like the eighty-eight notes on an acoustic piano keyboard along with flat, ribbon-like bands that stretch across above and below the "keys." Each segment responds to velocity, pressure, and location, allowing the Seaboard Grand to transmit control data for pitch, volume, and timbre through its USB connector. It also provides an input jack for footswitch control. (Juan Trujillo, courtesy of Roli) 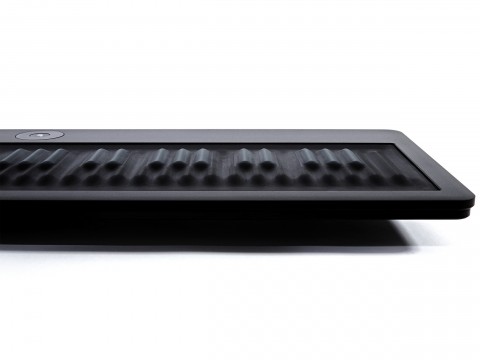 A view from the front of the Keywaves on a Roli Seaboard Grand. (Juan Trujillo, courtesy of Roli) 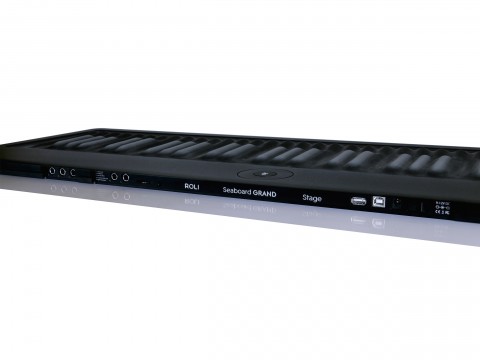 Toward the left on the back of the Roli Seaboard Grand are three ¼" footpedal jacks and ¼" left and right audio outputs. On the right are USB connections. (Juan Trujillo, courtesy of Roli) 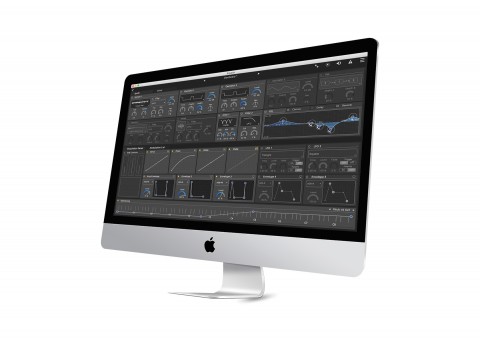 Roli developed Equator, shown here running on a Macintosh computer, for producers, performers, and sound designers to create sounds and map them to respond to Roli Seaboard instruments. If it's a Seaboard Grand, you can upload your sounds into the instrument for stand-alone use. (Juan Trujillo, courtesy of Roli) 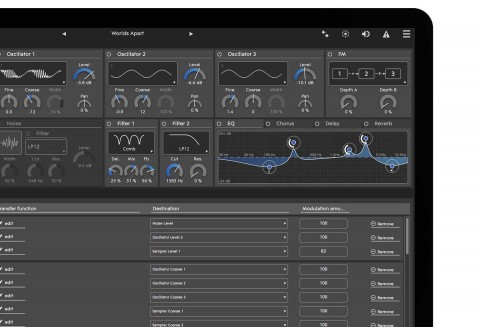 A close-up look at Equator parameters, including those for oscillators, filters, and a parametric equalizer. Access to parameters for controller assignments appear below. (Juan Trujillo, courtesy of Roli)

Roli introduced the Seaboard Rise USB controller in September 2015. Along with 25 Keywave keys that function precisely like those on a Seaboard Grand, Rise features USB I/O, a foot-controller input jack, and supplemental controls to the left of the keybed. It comes bundled with Equator for Rise, a cross-platform software synthesizer. 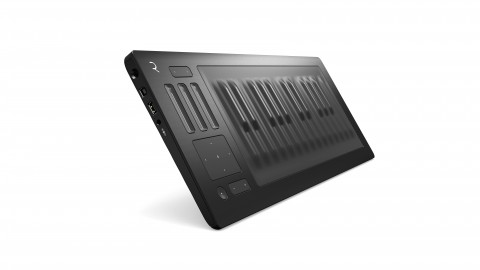 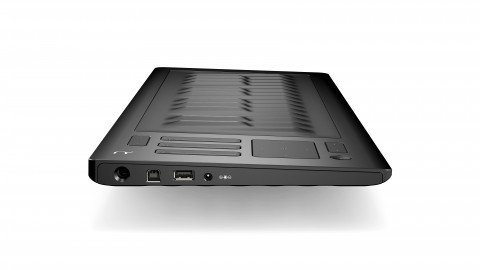 Located on the left end of the Roli Seqboard Rise (L to R) are an assignable foot-pedal input, USB A and B jacks, and the power input jack. Although you won't find conventional MIDI connections, the Rise is capable of transmitting MIDI data wirelessly via Bluetooth technology. It can also run on batteries. (Juan Trujillo, courtesy of Roli) 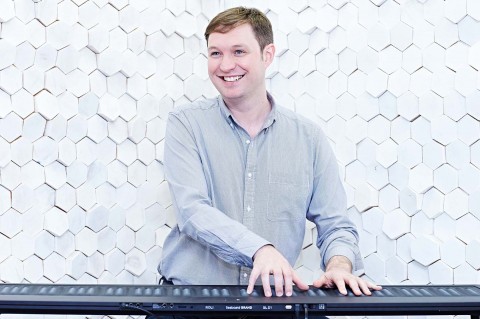 Although originally known for their faithful software recreations of renowned vintage synthesizers, Arturia has also developed a variety of music hardware — including the DSP-based Origin Desktop and Keyboard synths, the monophonic analog MiniBrute and MicroBrute synths, the Spark line of drum machines, and the AudioFuse audio interface. Along with their KeyLab series of keyboard-based USB/MIDI controllers, Arturia makes two pad-controller/sequencers that bear the name BeatStep. First came the original, by that name alone, in early 2014 (http://www.arturia.com/products/hybrid-synths/beatstep/overview). Its multi-color, backlit array of 16 velocity- and pressure-sensing pads (two rows of eight), 16 companion rotary encoders, transport/MIDI/channel?memory/mode buttons, tempo/transpose knob, USB connection, and MIDI, CV, and gate outputs — all three 3.5mm, with standard MIDI connector adapter included — introduced flexible controller and interactive step-sequencing capabilities in an affordable and well-built package. 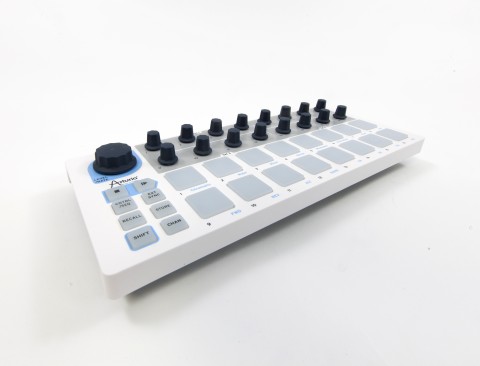 By mid 2015, Arturia had developed the follow-up machine, the BeatStep Pro (http://www.arturia.com/beatstep-pro/overview). Whereas the original BeatStep provided a single sequencer with up to 16 steps, 16 memories each for sequences and pad assignments, and two analog outputs, the newer model has two step sequencers with which you can program up to 64-step patterns, a 16-track drum sequencer, and a bevy more. There are analog pitch, velocity, and gate outputs for each step — Arturia also refers to them as "melodic" — sequencers, eight analog drum-gate outputs — all 16 drum sequencer tracks are also transmitted via MIDI, where velocity data will be included with notes — and clock I/O for synchronizing other devices to the BSP or it to an external master clock. All of the analog connectors are 3.5mm, which make the BSP ready to interface with Eurorack and FracRak modular and many patchable synthesizers. The BSP has non-standard 3.5mm MIDI jacks, but the unit comes with adapters to connect MIDI cables. Besides acting as the power input, the USB jack also allows interaction with a computer. The BSP is class-compliant, so Mac and PC will recognized it as a controller and it will readily interact with many digital audio workstations. 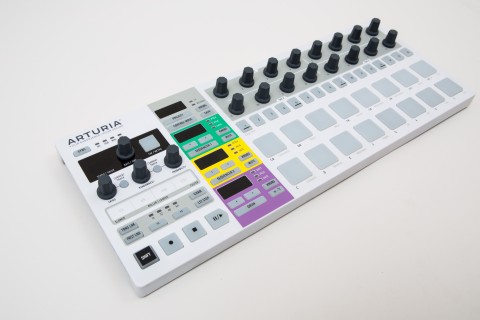 Like the original BeatStep, the BSP has 16 rotary encoders and 16 pads that sense velocity and pressure. It also sports transport buttons, LED displays for tempo and each sequencer, and an all important Tap Tempo button for immediate changes to playback speed. There's also the Roller/Looper strip, a touch ribbon that allows you to repeat a note in a sequence associated with a specific pad or repeat a certain section of a sequence — loop it — at a time division that depends on where you're touching the strip.

Arturia intends the BeatStep Pro to function as the main controller for an entire electronic-music system whether or not it's computer-based. I've heard rave reviews and look forward to working with one myself.

Alternative Controllers: Part 3 from The Synthesizer by Mark Vail -