Visionaries including Dave Smith from Sequential Circuits, and Ikutaru Kakehashi from Roland began to worry that this lack of compatibility between manufacturers would restrict people's use of synthesizers, which would ultimately inhibit sales growth. Talk of a 'universal' digital communication system thus began circulating in 1981. Dave Smith and Chet Wood presented a paper that year at AES proposing a concept for a Universal Synthesizer Interface running at 19.2 kBaud, using regular 1/4" phone jacks. 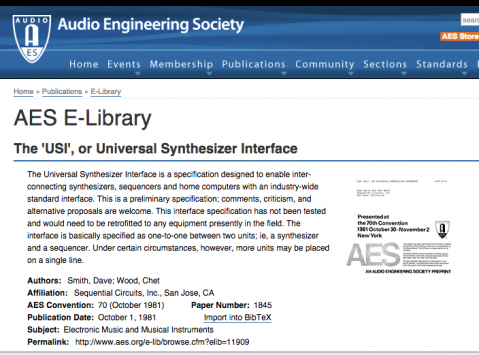 At the following NAMM show in January 1982 a meeting took place between the leading American and Japanese synthesizer manufacturers where certain improvements were made to the specification: increasing the Baud rate to 31.25 and adding the opto-isolation circuit.

MIDI (an acronym for "musical instrument digital interface) as its name was ultimately chosen, was first announced to the public in 1982, and by as early as December 1982 actually appeared on an instrument; the Sequential Prophet-600. Roland's JP6 followed hot on its heels -- the two were 'connected' successfully at the January 1983 NAMM Show -- and a new chapter in the history of electronic musical instruments was born. Here is a link to Craig Anderton's article. 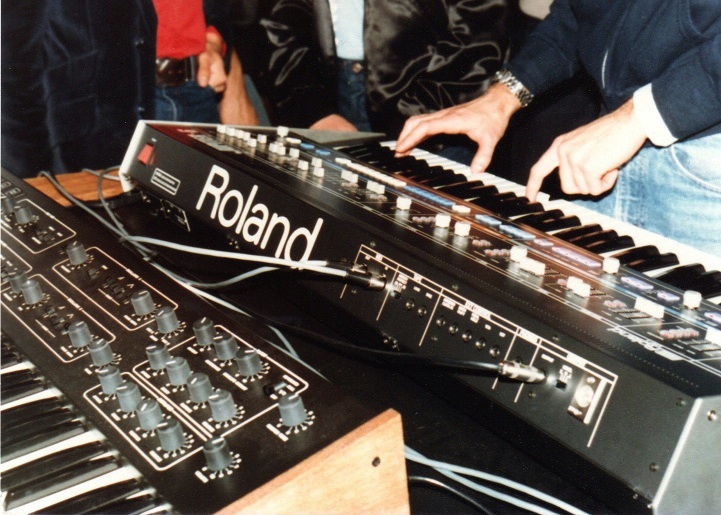 A Brief History of MIDI - Modules and MIDI - Harmony Central

As we close out MIDI’s 30th anniversary, it’s instructive to reflect on why it has endured and remains relevant By Craig Anderton The MIDI specification first saw the light of day at the 1981 AES, when Dave Smith of Sequential Circuits presented a paper on the “Universal Synthesizer Interface.” I...
https://www.harmonycentral.com/articles/modules-and-midi/a-brief-history-of-midi-r304/

There are two people who are credited with creating the vision for MIDI, Dave Smith, founder of Sequential Circuits and Ikutaru Kakehashi, founder to Roland Corporation. In 2013, thirty years after MIDI was first introduced, they were awarded a Technical Grammy award for their contribution to the music industry.

One day I was going past a music store in Camden Town and there was a crowd inside so I went in and there was a kind of hush whilst someone was explaining that this Sequential Circuits Prophet 600 had MIDI! Once I grasped what they were talking about I felt quite faint, my head spinning with the possibilities. I've never been the same since and neither has the rest of the world.

It was in 1983 that a collaboration between competing manufacturers resulted in a new technology that was introduced at the winter NAMM show where Ikutaro Kakehashi, founder of Roland Corporation, and Dave Smith, president of Sequential Circuits, unveiled MIDI. They connected two competing manufacturers' electronic keyboards, the Roland JP-6 synthesizer and Sequential Circuits Prophet 600, enabling them to "talk" to one another using a new communications standard. The presentation registered shockwaves at the show, and ultimately revolutionized the music world.

Quote from the Grammy article by Dave Stewart.  As a member of Eurythmics with Annie Lennox, Dave won a GRAMMY in 1986 for Best Rock Performance By A Duo Or Group With Vocal for "Missionary Man." Artists he has collaborated with include Tom Petty, Bob Dylan, Aretha Franklin, Mick Jagger, Alison Krauss, and Stevie Nicks. In 2012 Stewart released his latest solo album, The Ringmaster General

(In addition to the GRAMMY Awards, The Recording Academy presents Special Merit Awards recognizing contributions of significance to the recording field, including the Lifetime Achievement Award, Trustees Award and Technical GRAMMY Aw
http://www.grammy.com/news/technical-grammy-award-ikutaro-kakehashi-and-dave-smith

In 1983, the MIDI Specification was only about 8 pages long and defined only the most basic instructions one might want to send between two synthesizers -- things like how to play notes and how to control the output volume, etc. Very quickly, the arrival of this 'common (digital) language' created demand for new MIDI messages that enabled greater control of synthesizers but also for control of other recording gear and even stage lighting. MIDI also enabled computers to be applied to the music-making process. Although the way that MIDI works has not changed since 1983 (also almost preposterously inconceivable), the MIDI protocol has grown to encompass such additional concepts as: standardized MIDI song files (General MIDI, 1991); new connection mechanisms such as USB, FireWire, and Wi-Fi; new markets such as mobile phones and video games; and a whole world of 'alternative' and 'performance' based MIDI products.