MIDI Association partner AudioCipher Technologies has just published Version 3.0 of their melody and chord progression generator plugin. Type in a word or phrase and AudioCipher will automatically generate MIDI files for any virtual instrument in your DAW. AudioCipher helps you overcome creative block with the first ever text-to-MIDI VST for music producers.

Chord generator plugins have been a hallmark of the MIDI effects landscape for years. Software like Captain Chords, Scaler 2, and ChordJam are some of the most popular in the niche. Catering to composers, these apps tend to feature music theory notation concepts like scale degrees and Roman numerals. They provide simple ways to apply chord inversions, sequencing and control the BPM. This lets users modify chord voicings and edit MIDI in the plugin before dragging it to a track.

AudioCipher offers similar controls over key signature, scale selection, chord selection, rhythm control, and chord/rhythm randomization. However, by removing in-app arrangement, users get a simplified interface that's easier to understand and takes up less visual real estate in the DAW. Continue your songwriting workflow directly in the piano roll to perform the same actions that you would in a VST.

AudioCipher retails at $29.99 rather than the $49-99 price points of its competitors. When new versions are released, existing customers receive free software upgrades forever. Three versions have been published in the past two years.

Beginner musicians often have a hard time coming up with chord progressions. They lack the skills to experiment quickly on a synth or MIDI keyboard. Programming notes directly into the piano roll is a common workaround, but it's time consuming, especially if you don't know any music theory and are starting from scratch.

Intermediate musicians may understand theory and know how to create chords, but struggle with finding a good starting point or developing an original idea.

Common chord progressions are catchy but run the risk of sounding generic. Pounding out random chords without respect for the key signature is a recipe for disaster. Your audience wants to hear that sweet spot between familiarity and novelty.

Most popular music stays in a single key and leverages chord extensions to add color. The science of extending a chord is not too complicated, but it can take time to learn.

Advanced musicians know how to play outside the constraints of a key, using modulation to prepare different chords that delight the listener. But these advanced techniques do require knowledge and an understanding of how to break the rules. It's also hard to teach old dogs new tricks, so while advanced musicians have a rich vocabulary, they are at risk of falling into the same musical patterns.

These are a few reasons that chord progression generators have become so popular among musicians and songwriters today. 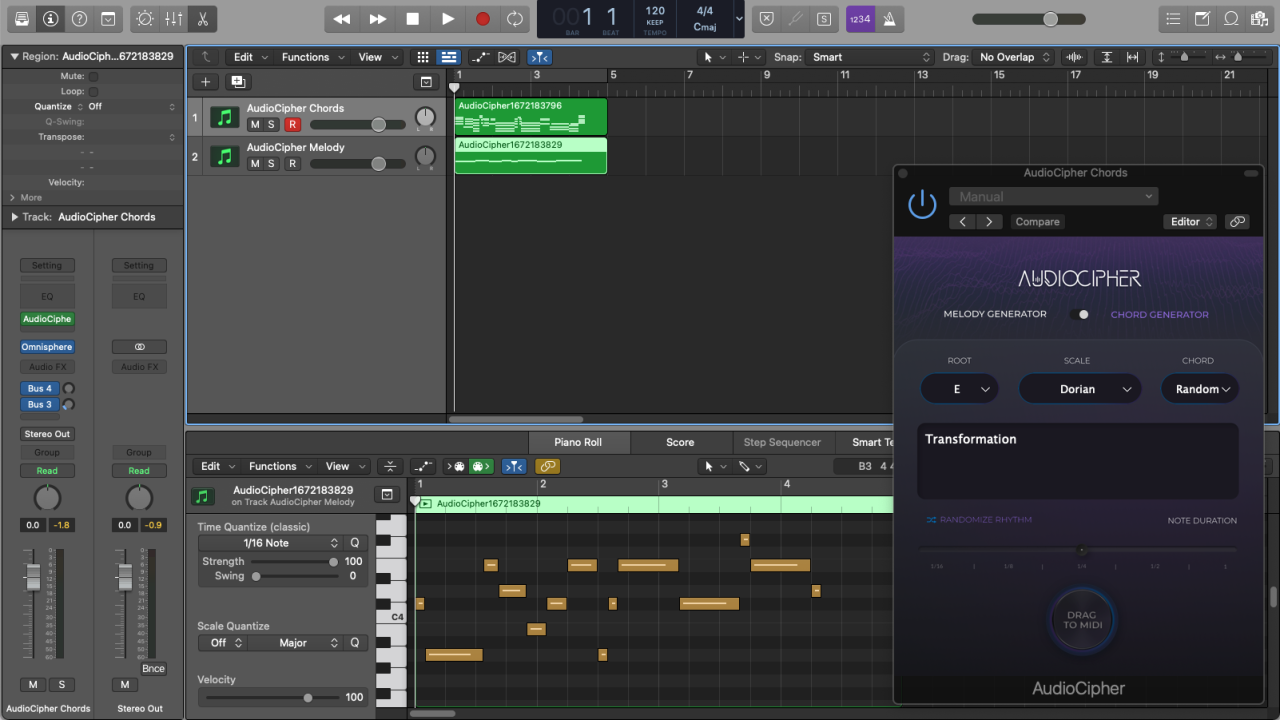 Overthinking the creative process is a sure way to get frustrated and waste time in the DAW. AudioCipher was designed to disrupt ordinary creative workflows and introduce a new way of thinking about music. The first two versions of AudioCipher generated single-note MIDI patterns from words. Discovering new melodies, counter-melodies and basslines became easier than ever.

Version 3.0 continues the app's evolution with an option to toggle between melody and chord generator modes. AudioCipher uses your word-to-melody cipher as a constant variable, building a chord upon each of the encrypted notes. Here's an overview of the current features and how to use them to inspire new music.

How to Write Chord Progressions and Melodies with AudioCipher 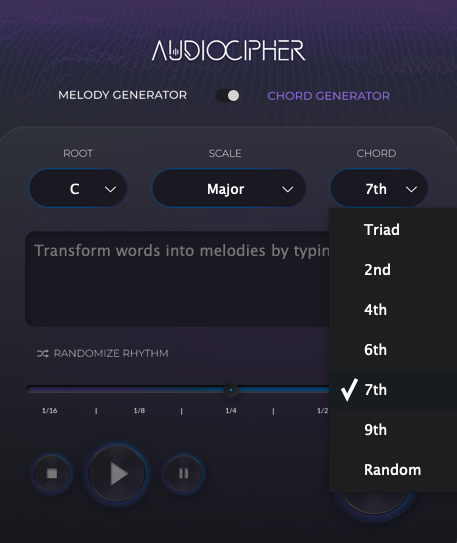 Get the creative juices flowing with this popular AudioCipher V3 technique. You'll combine the personal meaning of your words with the power of constrained randomness. Discover new song ideas rapidly and fine-tune the MIDI output in your piano roll to make the song your own.

Next we'll create a melody to accompany your chord progression.

Adjust MIDI in the Piano Roll

Once you've found a melody and chord progression that inspires you, proceed to edit the MIDI directly in your piano roll. Quantize your chords and melody in the piano roll, if the triplets feel too syncopated for your taste. You can use sound design to achieve the instrument timbre you're looking for. Experiment with additional effects like adding strum and arpeggio to your chords to draw even more from your progressions.

With this initial seed concept in place, you can go on to develop the rest of the song using whatever techniques you'd like. Return to AudioCipher to generate new progressions and melodies in the same key signature. Reference the circle of fifths for ideas on how to update your key signature and still sound good. Play the chords and melody on a MIDI keyboard until you have ideas for the next section on your own. Use your DAW to build on your ideas until it becomes a full song.

AudioCipher is a 64-bit application that can be loaded either as a standalone or VST3 / Audio Component in your DAW of choice. Ableton, Logic Pro X, FL Studio, Reaper, Pro Tools, and Garageband have been tested and confirmed to work. Installers are available for both MacOS and Windows 10, with installer tutorials available on the website's FAQ page. 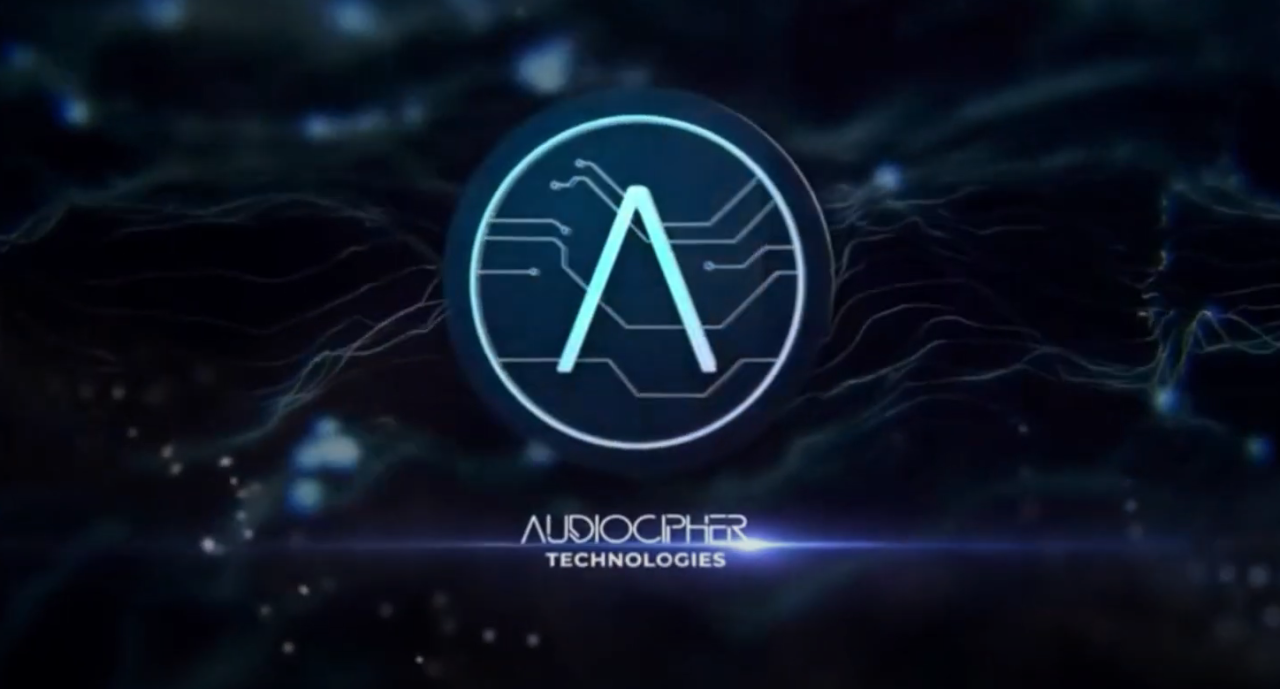 The blog also advocates small, experimental software like Delay Lama, Riffusion and Text To Song, sharing tips about how to use and access each of them. Grassroots promotion of these tools brings awareness to the emerging technology and spurs those developers to continue improving their apps.