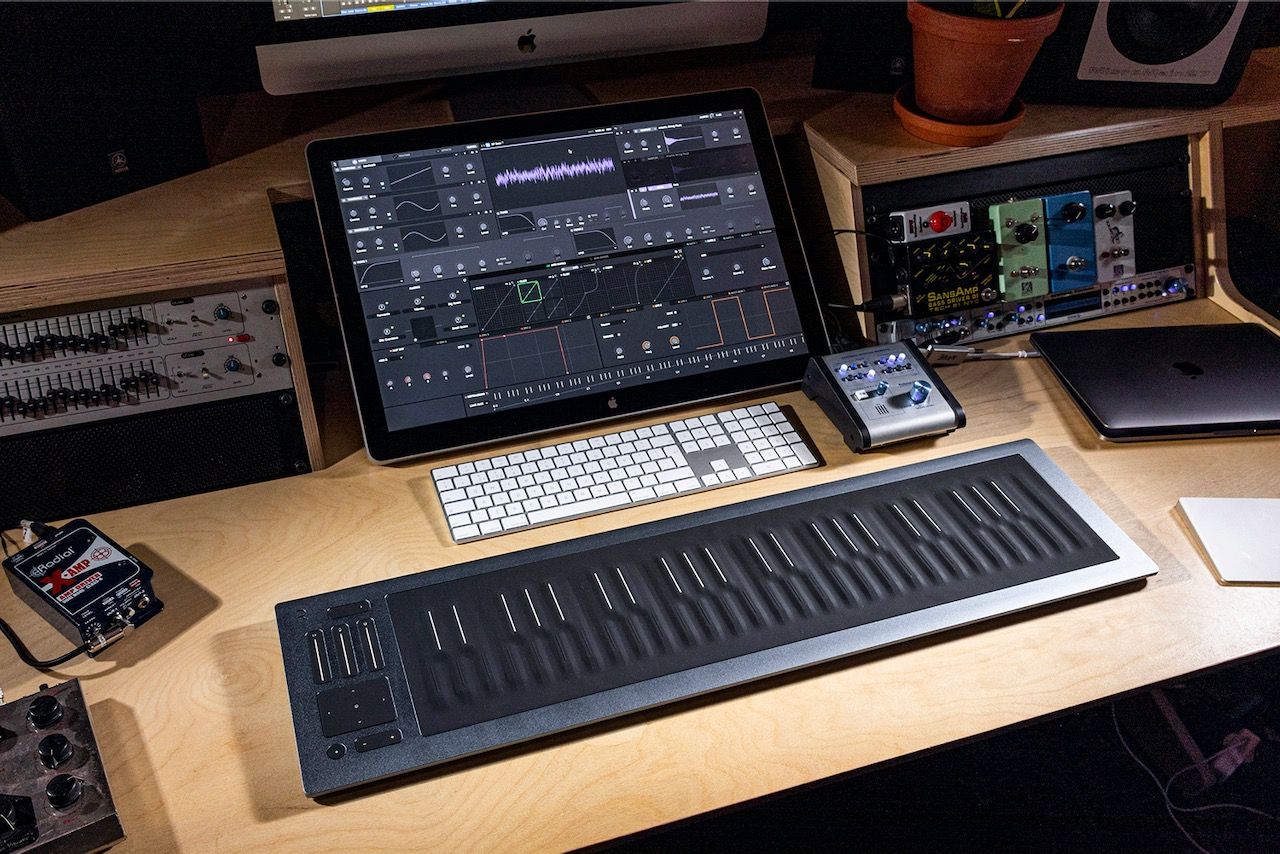 The Seaboard was a groundbreaking design that, through its roots in the form factor of a traditional piano-keyboard, provided musicians with intuitive access to the enhanced expression made possible by MPE technology. Not only did it help advance the MPE specification and catalyze a wave of industry innovation, but it made exploring the possibilities afforded by this new technology as instinctual as performing on an acoustic instrument. However, a unique challenge of designing MPE instruments is giving creators access to both expression and precision in equal measure. When originally bringing continuous expression to the Seaboard, we gave the playing surface a curved, sine wave-like structure. Our past experience and research suggested, though, that auditory and visual perception is not fast or accurate enough to track the finger-by-finger micro adjustments that are necessary to play a continuous pitch instrument like the Seaboard in tune across multiple voices. Not only could one’s fingers slip off the keys, one couldn’t easily perceive exactly where on the key one’s finger was touching. A muscle memory trigger was necessary to make the required micro-corrections in real time that enable mastery of an instrument. In designing a solution, we looked to other instruments with extensive gestural control, especially string instruments where continuous pitch playing creates depth of expression, but also presents challenges to playing in tune. The result was our newly re-engineered surface, Keywave2. It features precision frets, small embossed lines of silicone down the center of each key. Like a guitar’s fretboard, they serve as a motor-sensory guide while playing. We also broadened the surface of each keywave and articulated the shoulders to further improve finger register. They were subtle design changes, but revelatory in practice, creating what is by far the easiest to play interface we've ever made. The result is that it opens up the Seaboard and MPE creation to a much larger potential audience of musicians. As well as these hardware innovations, Seaboard RISE 2 also comes bundled with Equator2, the world’s leading MPE synth. Although it was released prior to Seaboard RISE 2 in 2021, Equator2 was built and designed from the ground up by the ROLI team as the essential sound engine for the latest generation of the Seaboard. This hybrid soft synth has already achieved critical-acclaim as a standalone product — but when paired with RISE 2, its innovative sound design tools and library of finely-tuned presets finally reach their full potential.

The Seaboard RISE 2 is not yet widely available, but even those who have had early access have found inspiration. Celebrated composer AR Rahman got a chance to experience the refined instrument, and his reaction spoke to our vision for what the Seaboard is able to achieve; the ability to bring to digital music the improvisational and spontaneous creativity that comes with playing an acoustic instrument. When considering the Seaboard RISE 2, AR Rahman reflected: “We need inspiration, musicians need inspiration. Sometimes… different things actually give us empowerment or expression. I’ve been in music for almost 30 years, composing music and always looking for happy accidents to happen, sometimes you play something wrong in an instrument and that becomes “oh, that sounded cool.” And it’s not meant to be but that happens. And so these instruments actually make us think differently, which is really cool.”

Our vision is to give access to the joy of expressive electronic music creation to as many people as possible. One of the things we’ve learned since first developing the Seaboard 13 years ago is that in order to make something accessible, you need to make its use seamless and enjoyable. Ever since, we've been on a mission to make the Seaboard and MIDI Polyphonic Expression as easy to use as possible, so that playing can be liberating and not frustrating. Part of that work we’ve done ourselves, through continuous refinement to the instrument, its platform, and its software. The Seaboard is easier to play than ever, and the software behind it, Equator2, provides creators with access to the richest library and creative control of expressive sound available. The rest of the work has been done by our partners in the industry. It has been truly inspiring to see the way MIDI and the manufacturers of expressive hardware and software have grown and developed since we got started in 2009. The number of brilliant new devices and MPE capable software platforms has transformed the landscape for musicians looking to explore expressive sound. Getting into the world of MPE has never been easier, more enjoyable, or creatively satisfying. We believe that the growth in the market for expressive products reflects and is derived from that. We hope that RISE 2 will further advance its possibilities and bring the joy of expressive electronic creation to even more musicians.

The Seaboard RISE 2 is currently available through pre-order on roli.com, with delivery expected in the fourth quarter of 2022. Following the pre-order, RISE 2 will be available for general sale exclusively through roli.com.
View Entry's Website
About the MIDI Association
MIDI Association IP Policy
MIDI Association Anti-Trust Policy