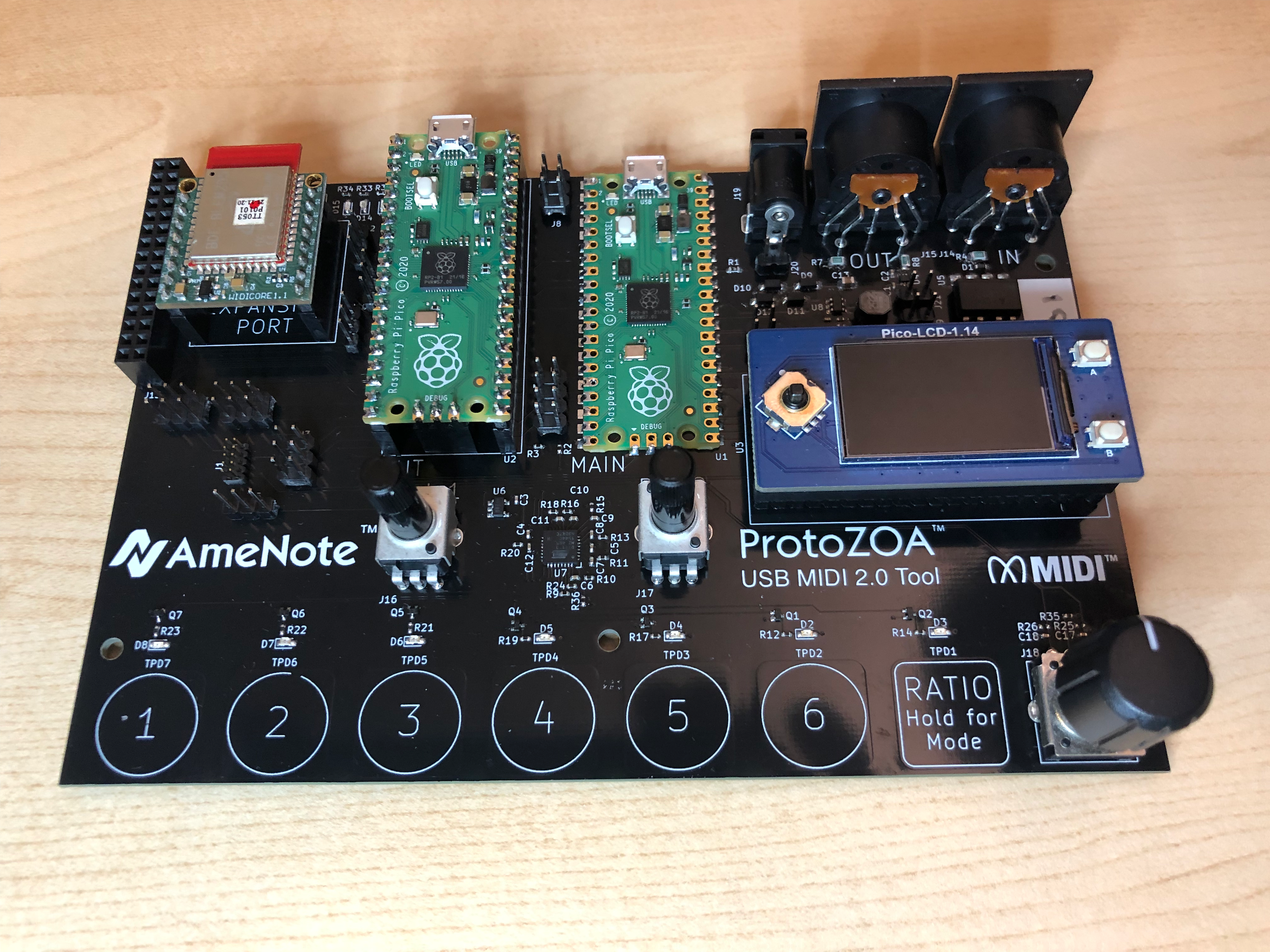 ProtoZOA is a flexible prototyping tool for MIDI 2.0. Open source firmware provides MIDI 2.0 interfaces and functions for developers to use in their own hardware and software products.

Most USB MIDI 1.0 products rely on off-the-shelf silicon or existing libraries for USB MIDI functions. None of those exist yet for the Universal MIDI Packet (UMP) and the MIDI 2.0 protocol, blocking MIDI Association members (and in the future a wider group of developers) from prototyping core MIDI 2.0 UMP functionality today. Developing a USB device- side driver is not the core competency of most MIDI developers.

• Providing a testing platform which connects via the USB MIDI 2.0 drivers recently released by Apple and Google and a test tool for Microsoft as they create Windows drivers.

• Provide USB MIDI 2.0 source code that other hardware developers can use under a no-charge permissive license.

This development builds on an existing stack known as tinyUSB, an open source (MIT) and well supported USB device and host stack that has been ported onto most of the embedded platforms used today.

The OS Abstraction Layer (OSAL) exists for the Raspberry Pico, simplifying this integration and development effort to the Device Class API (TUD).

The Raspberry Pi Pico board provides the main processor, power regulation and USB C connectivity which is sufficient to develop, test and experiment with MIDI 2.0 Protocol over USB and some base operations. This is extended with a base PCB that supplies hardware interfaces.

A custom PCB adds knobs, buttons and LEDs to generate UMP messages such as Notes or the 32-bit controllers of MIDI 2.0.

The design includes MIDI 1.0 Input and Output, connected to a MIDI Translator, as a way to send or receive UMP messages using any existing MIDI 1.0 devices. MIDI 2.0 related firmware will provide the foundational requirements for enabling UMP, including MIDI-CI Discovery, Protocol Negotiation, and Translation.

ProtoZOA includes several innovations:
• It is the world’s first USB MIDI 2.0 prototyping hardware tool available anywhere.
• It is an example of the collaborative nature of MIDI as MIDI Association and AMEI members agreed not only to support the development of the tool financially , but also to validate and improve the MIDI processing (for example MIDI 1.0/MIDI 2.0 translation)
• It is based on low cost widely available Pico processors so it is affordable
• Perhaps most importantly the code will be Open Source

The plan is that initially MIDI Association members will access the code and contribute to improve it. But eventually Protozoa boards and the most of the code (like the Tiny USB Device driver implementation) will be made publicly available for use by anyone who wants to develop MIDI 2.0 products. 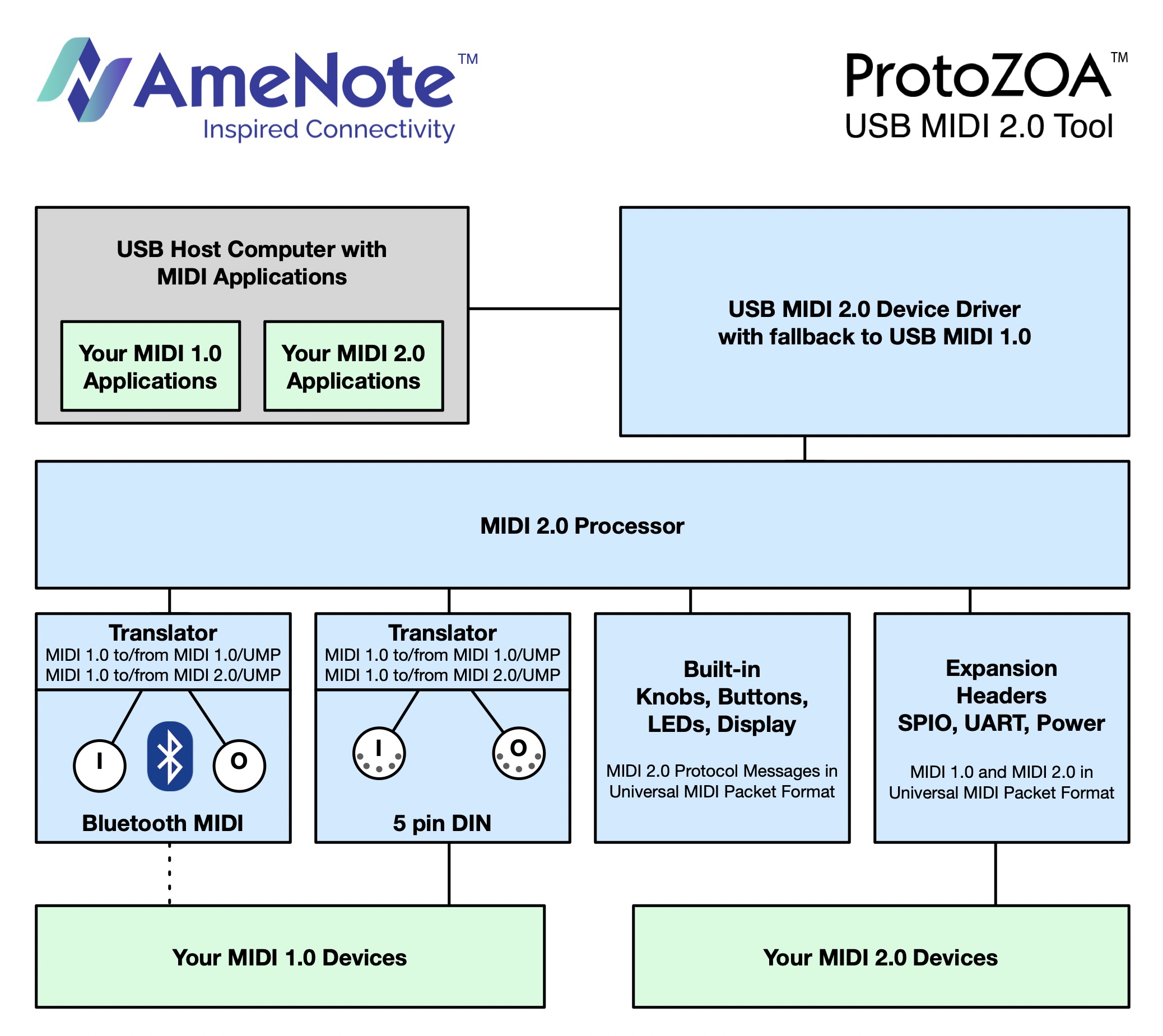 We believe that this prototyping tool will fuel the MIDI 2.0 revolution and inspire many new MIDI 2.0 hardware devices and software applications.

Over 50 ProtoZOAs are currently being shipped to MIDI Association and AMEI members all over the world.

It is the collaborative power of large companies like Apple, Google and Microsoft and smaller companies like AmeNote, Audio Modeling, Bome, Embodme, Geoshred, and many others working together that is truly inspiring.

The design includes openly available expansion slots, with plans to connect to other transports. ProtoZOA device has pins available to expand the built in hardware (knobs and buttons) and display options or for other developers to connect their own MIDI 2.0 hardware. It was designed to be very expandable in the future.