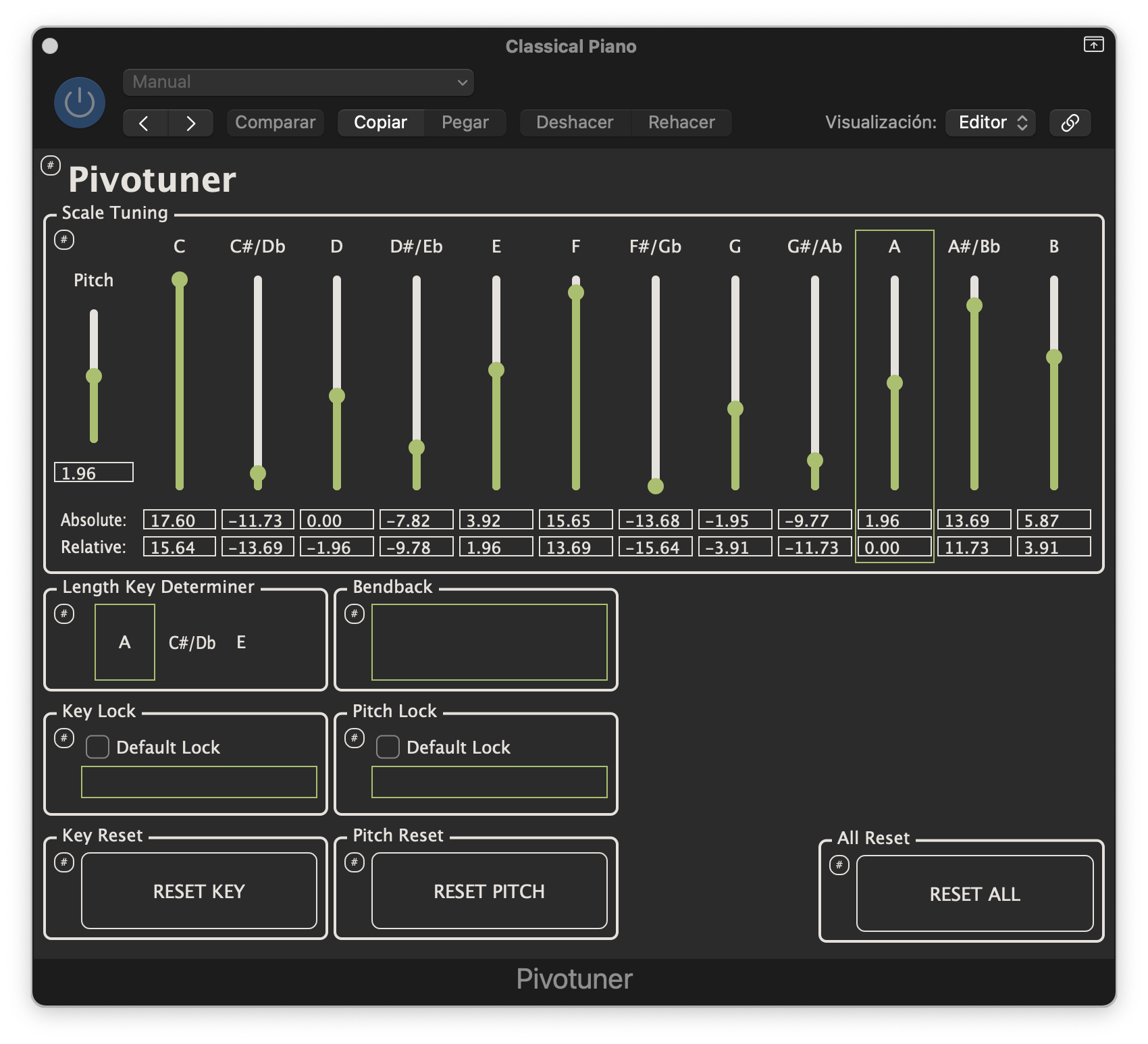 Pivotuner is a plugin which tunes MIDI data in pure intonation in real time. Besides enabling beautiful purely-tuned chords on keyboards, this also enables many other cool things such as microtonal modulation, and unusual chord sonorities! Most keyboard instruments of today are tuned to equal temperament. While straightforward and practical for a wide variety of situations, equal temperament results in chords that the ear does not perceive as completely in-tune. Furthermore, standard equal temperament limits musicians to only 12 pitch classes (pitches per octave), when the human ear is capable of hearing closer to 343 pitch classes. Pivotuner solves both of these problems, while still allowing musicians to think in the 12-note framework they are accustomed to! Pivotuner's algorithms are based around the idea of "pivot notes" or "keys" in purely-tuned chords: notes to which all notes other notes are tuned according to pure intervals.

This sort of process can be chained for larger modulations! Sometimes microtonal modulation is undesirable; sometimes we want to stick to a single key, or a single pitch center. Pivotuner can lock keys (which prevents microtonal modulation and enables unusual sonorities; tuning a F major triad to the key of D sounds quite interesting), and the pitch (which prevents microtonal modulation while still allowing chord tuning to shift)!
Pivotuner also has plenty of customization options, including the ability to fine-tune which intervals are used for tuning (there are at least three different ways to purely tune a minor 7th), as well as multiple tuning algorithms!

Microtonality is an increasingly prevalent in music, yet there are surprisingly few tools for working with it. Many existing tools require an in-depth understanding of the math and theory behind microtonal tunings, which can be extremely confusing for newcomers ("The septendecimal schisma is significant in Helmholtz-Ellis notation (2020 version) as the 17-limit formal comma which translates a Pythagorean interval to a nearby septendecimal interval").

A lot of microtonal software does not integrate nicely with other music tools, or is no longer supported. Software which attempts adaptive pure intonation often deliberately avoids the microtonal modulation.

Pivotuner offers a gateway for musicians to explore microtonality within a familiar 12-note framework; Pivotuner has convincing results even when in use by those unfamiliar with its underlying concepts. As a DAW plugin, Pivotuner integrates quickly and easily with tools musicians are most likely already familiar with!
And instead of restricting microtonal modulation, Pivotuner deliberately enables it!

Honestly there's nothing quite like sitting down at a keyboard, popping Pivotuner in, and noodling around for a while; it's a lot of fun to get effortless microtonal modulations! Besides this, I have used Pivotuner to write a solo piece for microtonal virtual piano (premiere TBD), and have seen it used by others to plan out microtonal modulations which are later recorded with voice (see attached file below, by @jordanolsonmusic on Instagram)! Pivotuner is currently in beta, and is ready to be released soon, with more updates to come!