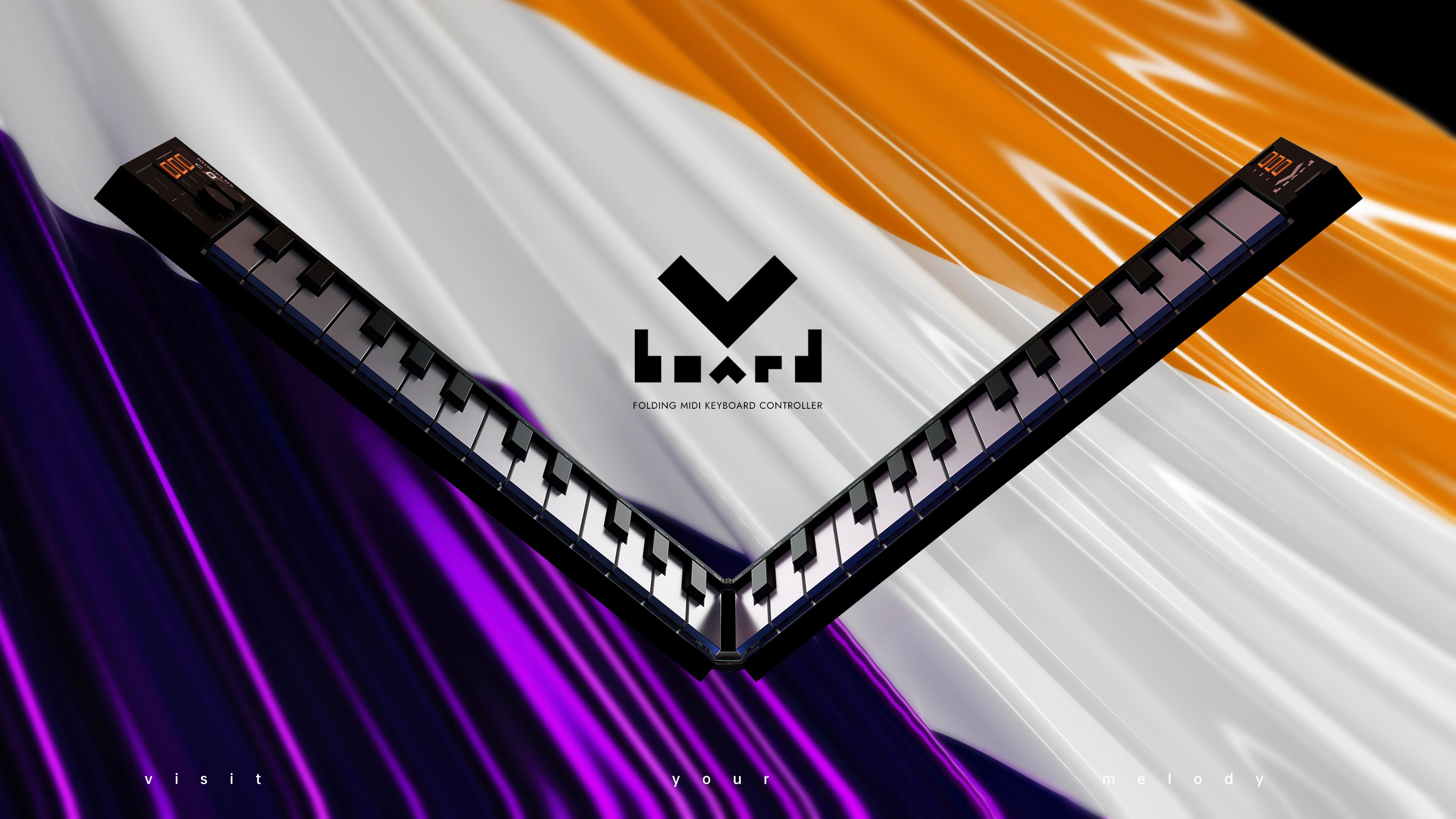 The Vboard 49 is the world's first portable foldable MIDI keyboard. Built-in rechargeable battery, can be connected to DAW, sound engine and mobile phone tablet via USB or Bluetooth, built-in a variety of styles, let the creation go with you.

Vboard 49 is the world's first 49-key foldable USB/Bluetooth MIDI keyboard, which is the size of a computer keyboard when folded. The ultra-thin folding design has the standard key width of a piano instead of mini keys. Bringing it allows you to capture the fleeting musical inspiration anytime, anywhere. The Vboard 49 achieves delicate dynamic feedback under the ultra-thin keys, which can express the music emotion very well. It is powerful and intuitive to operate. It has 2 assignable knob controllers, 3 transport controllers, and a multi-function touchpad (the default is touch pitch bend and modulation function, can be switched to XY PAD morph function); built-in includes China, Japan, Blues, European Church, Hungary, Middle East and other 14 styles of smart scales, you can improvise only by playing white keys. Through the USB-C/Bluetooth MIDI/3.5 MIDI OUT interface, there are three ways to connect to the computer/mobile phone/tablet PC/hardware synthesizer/hard sound source, using DAW music production software and App, providing you with a more convenient and fast experience.

1. Vboard is the world's first portable foldable series of MIDI keyboards. Originally designed by the Chinese team, Vboard 49 supports fast octave/chromatic transposition, 2 assignable knobs, 3 assignable transport buttons, and is compatible with most mainstream DAW software. The Vboard 49 uses a touchpad to control pitch bend and modulation; it can also be set through the TouchPad and switched to an XY Pad touchpad to achieve dual-parameter gradients and play morph synthetic sounds. 2. Vboard 49 has 14 built-in smart scale functions. You can play blues, chinoiserie, Hungarian, Japanese, middle eastern, Egyptian, bebop music styles just by playing the white keys. Without cumbersome music theory, even a novice can easily get started and quickly generate interest in creation and performance. 3. Vboard 49 is equipped with a dedicated mobile editor (MIDIPLUS Control Center). The application has an intuitive, friendly interface that makes editing MIDI messages easy. In the application, you can freely assign MIDI information to the device, and create your own Vboard 49 mapping template for your favorite analog instrument plug-ins and DAWs, and store it in your Vboard 49 keyboard, and you can also save it “in the cloud”.

We have created the world's first MIDI keyboard with standard key width, foldable, ultra-portable and rich connectivity, which solves the problems of many mini MIDI keyboards and makes it possible to create mobile music with higher quality.

After the product is released, it has won wide attention and recognition in the world industry, and it is planned to be sold in Europe, America, Southeast Asia and other countries and regions in Asia.