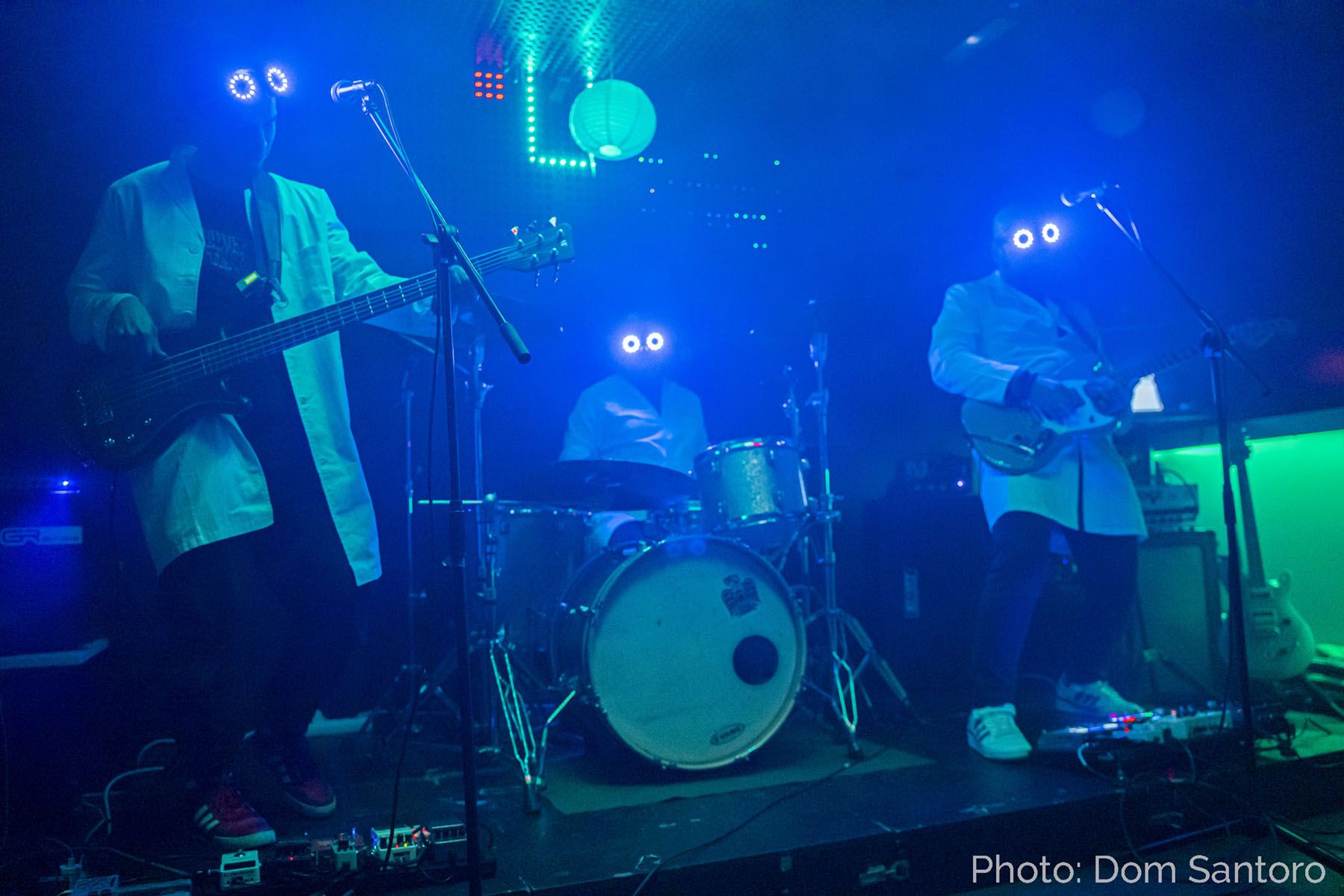 HootBeat is a platform for the development of MIDI-controlled wearables. It lies at the intersection of technology, performing arts and fashion. The prototype consists of these elements: - The Brain, built around a Raspberry Pi computer with Wi-Fi and Bluetooth (for BLE-MIDI capabilities), a MIDI-USB interface, and custom software. It is the main hub of the system, connecting and orchestrating the other components. - Several HootBeat Goggles equipped with LED rings. The Goggles are built around the ESP32 microcontroller to wirelessly connect to the Brain via BLE-MIDI. They feature multiple RGB LEDs in a ring configuration (one ring per eye), allowing to display vivid animations using a wide variety of colors. Currently developed animations include reacting to drum beats, oscillations between colors, and several rotating patterns. - A custom-made pedalboard controller with BLE-MIDI capabilities. Built with an Arduino Micro microcontroller, this device allows to select different programs via MIDI Program Change messages. This way, different combinations of animations and colors can be used for different songs. - A trigger-to-MIDI interface (currently a Roland TM-2) translates trigger signals from an acoustic drum kit to MIDI. The TM-2 plugs into the Brain with the MIDI-USB interface. Alternatively, an electronic drum kit can be also used to trigger light animations.

Wearable technologies present a unique opportunity to performing arts in general and live music in particular. There is a whole generation of new wearable music instruments that take advantage of electronic technology for enhanced sound control. Some example include the Mi.Mu gloves and the Wave and Neova rings. On the visual side, however, musicians do not have many options available. We aim at providing a solution with BLE-MIDI-powered wearables that feature RGB LED technology to augment the music performance. HootBeat wearables are, essentially, "lighting musical instruments". The system does not require a lighting technician to be set up. Instead, it uses interfaces already familiar to performing musicians, including drum triggers and a pedalboard controller.

HootBeat enhances music showmanship with interactive wearables. As music performance becomes the most important revenue stream for many musicians, it is critical for them to have a strong stage presence and a unique value proposition. HootBeat transforms musicians on stage into living, music-synced lighting fixtures, augmenting their gestural language onstage and helping to create a distinct mood for every song.

We have these future plans for the project: - We envision HootBeat to expand by including other wearables besides the Goggles. We are also experimenting with MIDI-synced visual augmentation of musical instruments. It is important to mention that HootBeat is not meant to be a replacement for DMX lighting systems, but a complement for them. By focusing on wearables and instrument augmentation, HootBeat aims at becoming a platform for "lighting instruments". - The software and firmware are under constant development. Further animations and transitions are planned, as well as tighter integration with musical passages that go beyond individual drum beats (e.g. multiple animations that support different sections of a song). - We are also experimenting with IoT (Internet of Things) services to include the audience in the performance. HootBeat would connect to a cloud application we are currently developing. Audience members will use their mobile devices to connect to this cloud application and interact with the HootBeat wearables, offering a new level of audience participation.

HootBeat is currently being used by Barcelona-based electronic rock band Spacebarman (www.spacebarman.com). There are no current plans for commercialization beyond that, but we are willing to start a conversation if there is enough interest.
View Entry's Website
About the MIDI Association
MIDI Association IP Policy
MIDI Association Anti-Trust Policy