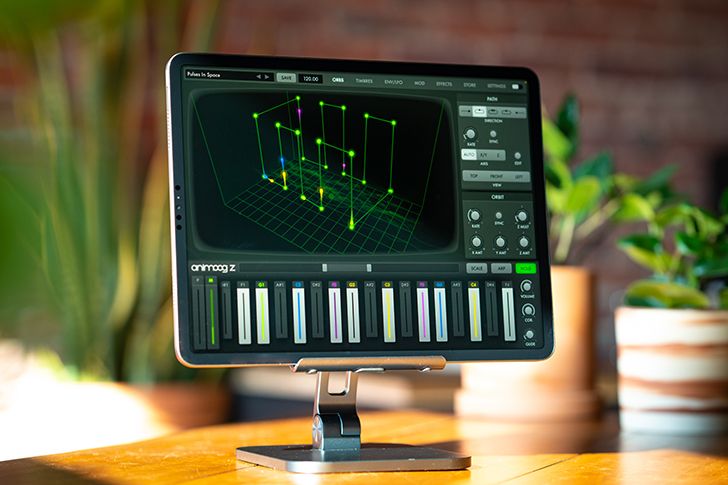 Animoog Z is an inspiring 16-voice polyphonic synthesizer that invites you to explore new concepts of multidimensional sound design and performance.

Powered by Moog’s Anisotropic Synth Engine (ASE), Animoog Z empowers you to visually traverse new sonic universes and even create your own!
ASE utilizes a novel orbit system to expand the concepts of wavetable and vector synthesis, allowing you to navigate dynamically through the X, Y, and Z axes of sound.

Sound design with Animoog Z is immediate and intuitive—simply select and drag the orbit path to explore endless sonic configurations. Animoog Z captures the immediate and intuitive experience of Moog synthesizers and applies it to the modern digital paradigm, enabling you to quickly sculpt incredibly fluid and dynamic sounds that live, breathe, and evolve as you play them.

Use Animoog Z’s built-in keyboard to control pitch and pressure per voice (or send MIDI out), or connect your favorite MPE controller and explore Animoog Z’s MPE-compliant sound engine. Animoog’s diverse library of timbres includes digital tones and spectral sources alongside analog waveforms captured from classic Moog oscillators (both vintage and modern), all run through a boutique’s worth of high-end outboard and analog signal processors. These include modular synth panels, Moog analog effect circuits, and more.

If you ever run out of sounds, you can use the built-in Timbre Editor to record and edit your own timbres! Visually captivating and sonically immersive, Animoog Z brings music production to the next level.

Whether you are new to synthesis or a professional musician, Animoog’s unique user interface gives you the power to easily create a visually vibrant and sonically rich universe. Animoog Z is available on iOS (iPhone, iPod Touch, iPad) and macOS (Intel and Apple Silicon) with full support for AUv3 for connecting to other audio apps such as GarageBand and Logic.

A VST3/AUv3 wrapper is available for plugin integration with DAWs like Ableton and Pro Tools; the plugin versions can even be used as effects to process sound or record timbres from other plugins.

This makes it possible to leverage all the expressiveness of the Animoog Z ASE sound engine on macOS devices by using the iOS version as a controller on an iPad or iPhone. Additionally, Animoog Z provides full MIDI CC 7-bit and 14-bit and MIDI Program Change learn through an intuitive user interface. Different MIDI CC and Program Change maps can be saved and recalled for use with different controllers, or performance situations. Once controls have been learned, Animoog Z can optionally also send the learned MIDI messages when knobs are tweaked or presets changed.

Truthfully, the greatest inspiration we have gotten from Animoog Z is through the incredibly creative and varied uses by our community. We are very grateful to our customers who share their music, installations, soundtracks, and sound design work with us that push the boundaries of this instrument. Suzanne Ciani has also been a constant source of inspiration for us through her live performance use of Animoog. Her use of the instrument’s touch controls and sound design capabilities are magical.

In addition to implementing user-requested features, we have committed to support the instrument with paid and free preset and timbre packs created and curated by staff, musicians, and sound designers with the intent to continually expand and evolve the sonic pallet of the instrument.

Animoog Z leverages a "freemium" model giving iOS and MacOS users access to the base functionality for free. Advanced users who want access to features such as the timbre editor and built-in effects can unlock the full app for a small fee. The intention behind this type of model was to lower the barrier of entry to people getting their hands on the "Moog Sound".
View Entry's Website
About the MIDI Association
MIDI Association IP Policy
MIDI Association Anti-Trust Policy