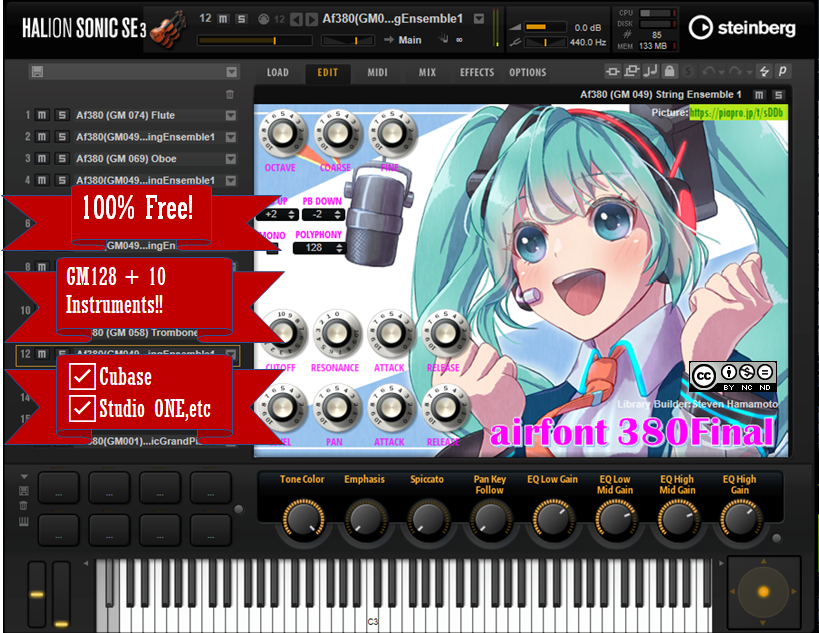 The introduction of SMF format files and Microsoft🄬 Windows 95© gave the general public an opportunity to experience computer music. Personal computers available to the general public at the time were equipped with only cheap sound cards, and those who initially played SMF files out of curiosity grew tired of them fairly quickly due to their monotonous expressiveness. Just around that time, TiMidity++, a GPL-licensed SMF playback software, became widely available, and many people who obtained the free SoundFont were impressed by its rich expressiveness, which probably led them to enter the world of MIDI. At that time, the sound font airFont380 Final was described as a "phantom" in Japan (a bit exaggerated). Even with a CPU running at about 100 MHz, the combination of TiMidity++ and airFont380 Final produced a powerful orchestral sound that fascinated the general public. A quarter of a century later, in 2022, many free DAW/DTM software products are available, but many people may have been disappointed when playing back SMF files using the sound libraries bundled with the free versions. It is hard to be motivated to start something creative with DAW/DTM if the result is inferior to the sound of a quarter of a century ago. This is one of the reasons why the DAW/DTM market has become so small. With this in mind, we have ported airFont380 final, a Public Domain sound font, into a nearly complete sound library format that can be read by Steinberg's HALion Sonic SE©, which is available for free. Because the sound library is a private format, it could not be automated programmatically, so the 138 instruments were analyzed one by one and ported manually using HALion Sonic 6.

It is already distributed free of charge. However, I have made it impossible to change minor parameters, so if I was to commercialize it, it might be a good idea to make a version with this lock unlocked for HALion Sonic 6. In order to have it widely used, I have spent a lot of my personal expenses on advertising and would like to recoup some of it.
View Entry's Website
About the MIDI Association
MIDI Association IP Policy
MIDI Association Anti-Trust Policy